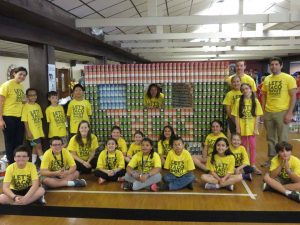 Glastonbury, CT – South Elementary of Windsor Locks, with help from Connecticut-based architecture firm The S/L/A/M Collaborative, Inc., won the “Best Use of Labels” award at the AIA Connecticut-sponsored CANstruction CT event held during the two-day Associated Building and Contractor’s (ABC) recent annual Construction Pro Rodeo in Wallingford. This is the second year this team has worked together on CANstruction. Last year the team won the Connecticut Award in this event.

CANstruction is an international 4-hour timed event, which is most often a competition between regional architectural firms. However, AIA CT has historically chosen to incorporate students into the event to give them exposure to the profession, said SLAM architect, Andrea Boyle, AIA. She is a co-coordinator for CANstruction CT. SLAM designers Michael Cafro and Karen Glass spearheaded the SLAM team supported by Courtney Erwin and Matt Slightom, also SLAM designers.

This year’s competition was held on Cinco de Mayo, and so SLAM/South Elementary focused on a Mexican-themed Taco Truck called “Let’s TACO ‘bout Hunger.” The judges commented on the successful incorporation of the Mexican flag and colors into the truck’s body and the creative use of labels for the windows. The team of 18 students used 2,091 cans to create its sculpture. The students raised the majority of the funds needed — $1,200 — to purchase the cans, and received financial and in-kind support from Shop-Rite in Enfield, Home Depot in Glastonbury, and The S/L/A/M Collaborative. Approximately 16,000 cans, which will be donated to Connecticut food pantries, were collected this year by the six competing teams.