Boston – It is often said that life is about learning — about ourselves and our relationship with the world around us. Anthony Papantonis, president of Nauset Construction, and Michael Liu, principal of The Architectural Team (TAT), rediscovered the meaning of that adage during a recent trip to Cambodia with Habitat for Humanity Greater Boston (HFHGB). 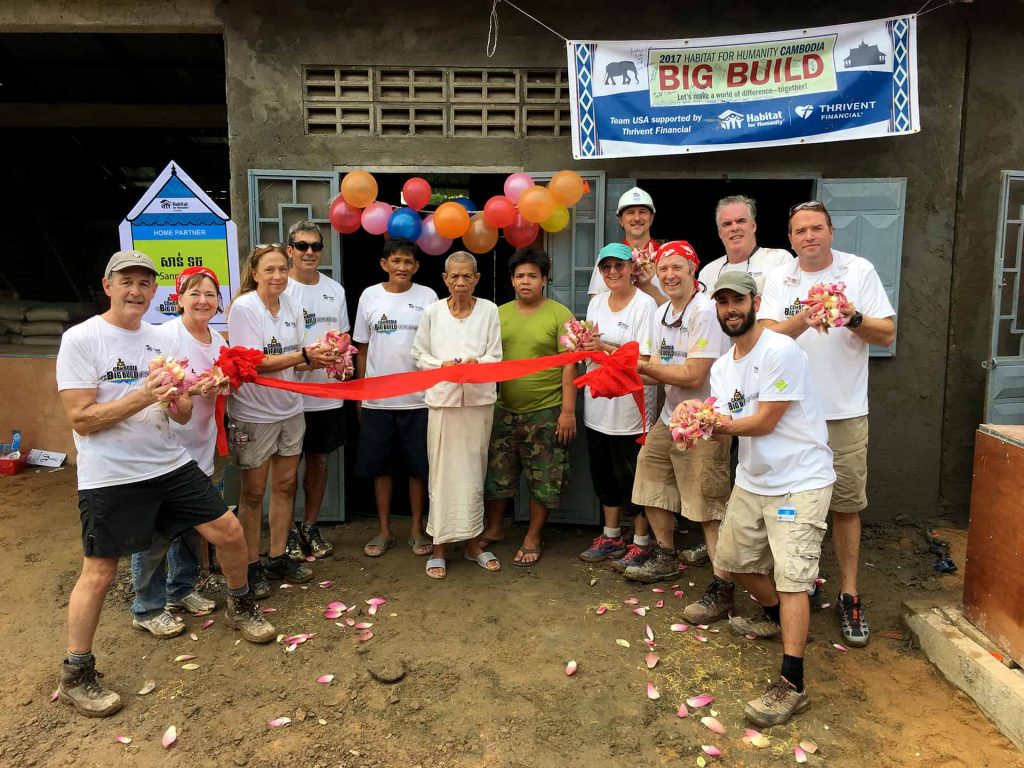 The construction professionals (who also sit on the Habitat Greater Boston’s board of directors) were members of a Big Build team that traveled to that impoverished nation to help build 23 homes for the people of Battambang.

The homes are single-story, one-room structures, approximately 10’ high x 14’ wide x 22’ long. They were constructed using poured concrete frame with terra-cotta brick or CEB partitions for walls, with a metal door and single windows at the front and rear. The roof frames were made with teak wood beams (which is native to Cambodia) with attached corrugated metal roofs, and the floors were made of concrete. Although there is no running water or plumbing, each house comes with a bricked-in bathroom, with a toilet that is connected via pipe to a submerged precast tank behind the house.

Concrete finishes were applied over the brick or CEB structures to complete the homes. Each of the 23 building sites had a translator assigned to it, as well as a safety officer. The home that Papantonis and Liu helped to build was constructed with fired brick and mortar.

“Although I have construction experience, I’m certainly not a mason,” said Papantonis of the building process. “They had a couple of roving construction supervisors that were local and familiar with this style of building, and once they showed us what to do, we just went to work. It was an interesting learning experience.”

The crew of approximately 1 dozen volunteers was able to finish the house in just five days. And while the job entailed considerable physical labor, the biggest challenge may have been the climate conditions. Temperatures topped 95 degrees with 98% humidity, according to Lark Palermo, president and CEO at Habitat for Humanity Greater Boston, who also participated in the project. “Everyone worked incredibly hard during this build trip,” said Palermo. “We pushed through the extremely high temperature and humidity, knowing that the end result of our efforts would mean a new home for a local Cambodian family.”

Despite the demanding labor and difficult working conditions, the rewards of completing the project far outweighed the hardships, according to Liu and Papantonis. Liu, who was accompanied by his 17-year old son on the trip, was especially moved by the indomitable spirit of the Cambodian people he encountered, many of whom had suffered immense personal tragedies during the reign of the Khmer Rouge. “The trip was so rich in terms of the human experience,” he recounted. “There were just so many amazing stories. These people are so removed from the kind of life we live here that we take for granted, and it really puts things in perspective.”

Papantonis said that one of the benefits that he received was that the trip took him out of his comfort zone. “I learned a lot about myself from the experience. And in terms of doing this type of work, it’s a great way to understand the culture of another country,” he said. “It’s one thing to go to a country and do the tourism thing and see the sights, but when you’re really immersed in the lives of the people of the village, you get a whole different perspective of what it’s like to live in that country.”

Papantonis, a member of Habitat Greater Boston’s Board since 2010 and current vice chair, first became involved with a Habitat Big Build when he was invited by long-time board member Liu to participate in the Jimmy and Rosalynn Carter Work Project in Hanoi, Vietnam in 2009. For Liu, this was his third trip overall and second of 2017, having been part of a Global Village trip that built homes in Veles, Macedonia in May.

Liu and Papantonis each have over 30 years of experience in the design and construction industry, but because the building materials and modes of construction in Battambang differ so radically from those found in the U.S., much of that knowledge was not transferable to this mission. Half of the modest homes were constructed using brick, while the other half were built with compressed earth blocks (CEBs), a building material made from damp soil compressed at high pressure. Nearly all of the construction processes were done manually, and even basic hand tools such as levels and tape measures were in short supply.

Which is not to say that the skills that Papantonis and Liu had acquired over the years were not invaluable to the project. “The leadership of Tony and Michael and some others on the trip really pushed us further than we would have gotten,” said Peter Trainor, the development manager at Habitat for Humanity Greater Boston who coordinated the details of the trip. “So having them and their expertise – even though it wasn’t in masonry – was extremely helpful.”

Habitat for Humanity also makes a concerted effort to work within the existing culture of the locality where they are building homes. It is extremely important that the volunteers respect the local people and the local way of doing things. Habitat is there to help and to learn, but not to teach. So volunteers go into a community as guests and defer to the judgement of the locals as to how the process works.