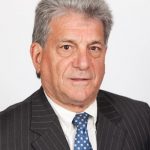 Russo was chosen based on criteria set by the college’s Industrial Advisory Board. In 2014, he demonstrated the utmost skill, integrity, and responsibility while making a significant contribution to the Architecture, Engineering, and Construction (AEC) industry. He has served on the CCSU Advisory Board for 14 years, including two years as its chairperson, and has been instrumental in ongoing improvements to CCSU’s construction management program.

This honor is neither the first for Russo nor for KBE. Russo also won the 2012 Connecticut Building Congress Appreciation Award and the 2007 American Society of Professional Estimators Estimator of the Year Award. He also won Madison “Who’s Who in Construction Executives & Professionals” awards from 2005-2006 and 2010-2011.

Recently, the Connecticut chapter of Associated Builders and Contractors bestowed six awards upon KBE, including its most prestigious honor, the Merit Cup.