“I am not alone.” That is what went through my mind the first time I attended a 500-person real estate networking event where 90% of the room, if not more, were male faces. I had already been involved in various women’s support networks and I knew I would find one of them in the crowd. Sure enough, a few minutes into the sea of men, I saw a familiar face: a woman from my CREW network. We immediately joined forces to work the room, and soon after, we found other women. Throughout the night we made introductions for each other. We made room in dialogue so our voices could be heard.

Women’s network groups have been extremely important in my career – not only when networking in rooms where being a minority is intimidating – but for finding mentors, coaches, and role models to emulate. As an architect, the Women in Design (WiD) group within the Boston Society of Architects (BSA/AIA) has created that essential space of non-competitive camaraderie. It’s a safe place to let your guard down, talk about vulnerabilities, and find the encouragement to advocate for myself and others.

Within Women in Design, I am part of the Principals Group and a co-chair of the WiD Award of Excellence Committee, which annually recognizes three exemplary women who use their position to give back and inspire others. This year, we’re celebrating the award’s 20th anniversary with an exhibition titled “IMPACT, Inspired and Inspiring.” The award reflects the values of the women in the field and recognizes design excellence, journey, and character. Being a part of the awards process has offered me a window into how these amazing women have enriched other people’s lives. It inspires me to think about how my contributions could impact others.

I believe in paying it forward. In my WiD involvement, I have straddled between the Principals Group and emerging women leaders, which has given me a balanced look at the career struggles of women at all stages in their careers. I discovered that there was a damaging disconnect in the pipeline for women seeking practice leadership, so we assembled a small group of principals and emerging women leaders to form the WiD Mid-Career Women in Design Mentorship Program. We have been able to mentor 30 women each year, with a focus on connecting women to a larger network, providing individualized attention from a mentor, and giving access to new career perspectives and role models. Now in its third cycle, the program has taken on a life of its own, inspiring two additional AIA chapters to begin similar efforts.

Support groups matter when you are trying to grow your professional network as a female in a male-dominated industry. My CREW network has been instrumental in expanding business partnerships and creating non-traditional minority teams to pursue new projects. You need fellow women and wingmen to move the needle toward a more equitable playing field, where diversity becomes the new normal, and where action happens through inclusion. 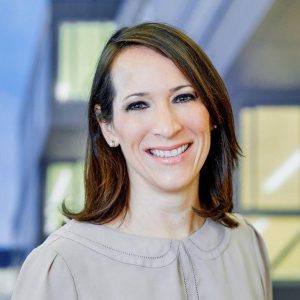 Yanel de Angel, FAIA is a principal at Perkins and Will.