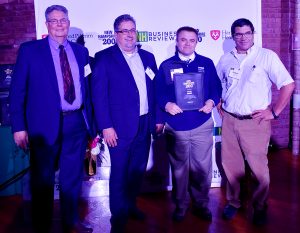 Manchester, NH – TFMoran’s chief operating officer, Dylan Cruess, was selected as one of New Hampshire’s 200 Most Influential Business Leaders by New Hampshire Business Review. The “New Hampshire 200” Inaugural Reception was held on Oct. 30 at the DoubleTree by Hilton Manchester.

Cruess was named one of the 200 chosen by New Hampshire Business Review’s editors after a year-long research initiative was conducted for the state’s most influential business leaders in the private sector across major industries.

Cruess joined TFMoran, Inc. in 2001. In 2013, he became an owner and COO when the company was transferred to four senior employees. He is very involved in the local community and is currently on the board of directors for numerous organizations including the Greater Manchester Chamber, March of Dimes, and Business Committee for the Arts.

All the selected individuals were asked to complete a questionnaire. When asked about the most important business lesson learned, Cruess stated, “There are about two degrees of separation in the business community. It’s vitally important, even in the most challenging circumstances, that you treat people with respect and fairness. Building and maintaining a great reputation and fostering good relationships are crucial.”

His advice to those in the same industry is to make a difference in the communities where you live and work, and to be involved in both industry-related associations, as well as non-profit organizations as an investment that not only benefits your business but creates a socially conscious culture in your organization.