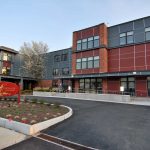 Designed by The Architectural Team

Lighthouse is an industry leader that consistently ranks at the top of the list of the Commonwealth of Massachusetts Department of Public Health’s “Report Card” of all skilled nursing facilities in the state.

The project included the ground up construction of a new, three-story 17,000sf addition and the renovation of an additional 10,000sf of existing space. The project broke ground in November 2013 and was completed in mid-March.

Designed by The Architectural Team (TAT), the addition and renovation provides the facility with 12 single-unit short-term rehabilitation beds; suites for physical, occupational, and speech therapy; medical office and clinical space; and a 2,700sf, state-of-the-art rehabilitation gymnasium.

The gym features the latest in therapeutic equipment, including a car simulation station featuring a replica “half-car” that allows rehabilitating patients to practice exiting and entering a vehicle, as well as an “uneven surface area” with strips of brick, concrete, paving stone, and an actual curb, so patients can safely practice walking on less-than-ideal surfaces.

A three-season wraparound porch for all three floors of the building was included with the addition to provide residents with a panoramic view of the surrounding neighborhood.

“It was very important to us that this project have minimal impact on the daily routines of Lighthouse residents, visitors and staff. The Nauset team was able to achieve this goal as well as deliver the project in a timely and cost effective manner through one of the worst winters in Boston’s history,” said Gregory Grove, President and CEO of the Guardian Foundation, Inc.

With a history rich past, the site of the current Lighthouse facility was originally home to Revere General Hospital, which began operations in 1939. It later served as a housing facility for sailors on leave during the Vietnam War and in 1986 it opened as a skilled nursing facility under the name AtlantiCare Nursing Home. An affiliate of The Guardian Foundation, a not-for-profit Atlanta based organization, purchased the facility renaming it Lighthouse of Revere (Lighthouse).

“The success of the Lighthouse project is a result of the owner, architect and contractor working closely together for over 12-months through preconstruction planning and design coordination, which created the momentum for a strong project start that was maintained throughout construction,” said TAT Principal, Michael Liu.

“Over the past decade, we have established ourselves as one of the region’s premier construction management firms in the areas of senior living and skilled nursing, and our expertise has allowed us to efficiently and safely construct complex projects in occupied and operational facilities such as the Lighthouse” said Anthony Papantonis, President of Nauset Construction. During that span, Nauset has built new communities and renovated existing facilities for some of New England’s most trusted senior living operators, including Benchmark, Five Star, EPOCH, Genesis HealthCare and Wingate Healthcare. Papantonis has also become a highly sought after speaker for organizations such as The Massachusetts Assisted Living Facilities Association (Mass-ALFA) and is a frequent panelist for A/E/C symposiums on senior and assisted living facilities.