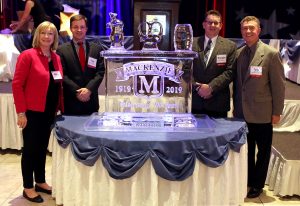 MacKenzie received multiple awards as a subcontractor on three winning projects at the event that draws 600 guests and has become one of the industry’s largest Connecticut events.

Its sponsorship package included an ice sculpture that recognized its 100-year legacy in business.

The MacKenzie Painting Companies, currently headquartered in Stratford, is the direct descendant of David H. MacKenzie Incorporated which was founded in Bridgeport in 1919.

MacKenzie is one of the oldest Connecticut painting contractors, specializing in commercial painting, wallcovering, resinous flooring, spray foam and fireproofing services in a variety of venues and has successfully completed work throughout Connecticut and surrounding states.