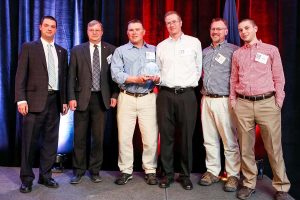 Scarborough, ME – Landry/French Construction Company has won a first place award in the 2015 Build Maine Awards Competition for its construction of the new State of Maine Office Building in South Portland. Sponsored by the Associated General Contractors (AGC) of Maine, the award was presented at the AGC’s annual event at the Augusta Civic Center on April 15, 2015.

The building was designed by Mark Mueller Architects of Portland.

“We are extremely proud to have received this award,” said vice president Kevin French. “This was truly a team effort that could not have been completed without the skills and steadfast dedication of everybody who participated on the project.”

The fast-track project was completed in record time — just 286 days and two-and-a-half weeks before the required completion date. The project included a number of innovations in construction techniques including the off-site fabrication of the shell of the building. This “panelized construction” technique enabled construction of the framing, waterproofing, sheathing, and window installation all at one time.

The building also has one of the largest installations of porous pavement and underground storm water retention in southern Maine and required 45,000 cubic yards of multiple materials to complete.