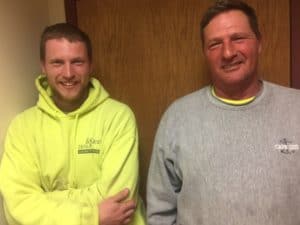 On episode 5 of High-Profile’s Build Better Podcast, Anastasia welcomed Jared Hesek and Pat Donovan of Karas & Karas Glass Company Inc., based in South Boston. Both Hesek and Donovan began working at the company through a unique program (later named the “Boston Phoenix Foundation”) created by David Argus. Argus started the program to give recovering addicts a chance to pursue careers in the construction industry.

Donovan is a Local 7 Ironworker and will celebrate 15 years of sobriety this year. Hesek is a union carpenter and is five years sober. Both men started their journey to sobriety through the Gavin Foundation, a substance abuse treatment program based in Massachusetts.

The program at Karas & Karas has given both Donovan and Hesek a job that is rewarding along with a long-term plan for retirement, two things neither of them had experienced before, but Donovan says one of the most valuable parts of the job is having other people to talk with that can relate to his journey, and his challenges. With 15 people now in the program, Donovan says having others at work that also understand the struggles of staying sober brings them closer together and helps them to be more comfortable with each other.

Hesek says, “When somebody is struggling, you can see it because we’ve been there. When you’re struggling at the time, you forget how to get out of it. Sometimes you need that boost or that helping hand,” and the guys in the program provide that for each other.

Both Hesek and Donovan work to help others successfully maintain their sobriety by speaking about their individual journeys. Donovan also feels strongly about making himself available by phone or text to those who may be struggling. He believes this is especially important because he remembers the days he just needed someone to talk to, but didn’t always have a person to call or who would listen. Making that connection with someone, he says, can be the difference between relapse or continuing to stay sober.

Of the reason he continues to speak, Hesek says, “All I can do is keep doing what I’m doing because there could be that one person that hears it, or that one time that one person gets something out of that message or they hear one word that I say and it makes a difference in their life.” He says there is one message he hopes everyone will walk away with: “Anybody can do it. There’s hope.”

Donovan is excited about how far he has come, thanks in big part to the program at Karas & Karas. To those that are struggling, Donovan offers words of encouragement. “It’s going to be difficult,” he says, “but you just have to suck it up. Nothing good is going to come out of anything that is easy. We have to go through a hard time to get to where we want to be.”