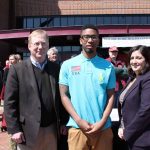 The $22-million facility, funded by the University of Massachusetts Building Authority, is slated to open in Spring 2015 The 53,000sf  building will serve both the men’s and women’s basketball programs with dedicated practice courts, office space for the coaching staffs, new locker rooms, and areas for strength and conditioning along with athletic training services.

“Today is an exciting milestone in the construction of a first-class, state-of-the-art athletic facility for the students of UMass Amherst,” said  Filippone. “The Champions Center was designed to be one of the best basketball facilities in the country to provide student athletes with all the tools they need to train and succeed.”