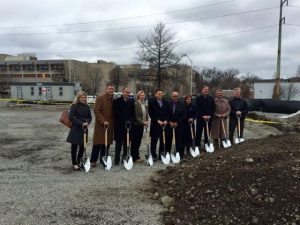 Malden, MA – The Point at 180, an upscale 86-unit apartment property, kicked off construction with a groundbreaking ceremony onsite at 180 Eastern Avenue in Malden Center recently.

The groundbreaking was attended by the mayor of Malden, city councilors, and other local officials. Also attending were Rebecca Mattson, principal of Sagebrook Development LLC, the developer of The Point at 180; Christina Whitting, broker/owners; and Fredrick Massa, broker/owner of Doubleclick Rental Properties, LLC of Medford, property manager and exclusive leasing agency for the project.

The Point at 180 project will be built on a 14,000sf open site at 180 Eastern Avenue, walkable to the MBTA’s Malden Center station. Eighty-six one- and two-bedroom units, ranging in size from 650sf to 1,200sf, will begin at $1,900 per month. Amenities will include fitness and club rooms, an extensive private landscaped patio with gas firepits and grills, indoor parking, and a private resident bike room along the Bike to the Sea, which is a recently converted bike path located immediately adjacent to The Point at 180.

Completion of the project is slated for May 2017.

The contractor is Rubicon Builders, and The Point at 180 is designed by The Architectural Team of Chelsea.

Mattson said, “We are very excited about getting underway. This project, at the tip of where Eastern Avenue meets Route 60 – hence “The Point” – with its large bay windows, great light, beautiful finishes, and proximity to the T and bike path, will be an attractive place to live –particularly for people who want to make the most of being close to the City but also have the neighborhood feel of Malden Center.”

With a full Stop & Shop only three blocks away from The Point at 180, a new CVS opened one block away, and new bars and restaurants popping up nearby, Malden Center is an active, walkable downtown.  Residents can leave their car parked, or perhaps not even have a car at all, given the nearby transit and wide range of neighborhood shopping and dining nearby.  In addition, the popular new Assembly  Row retail and entertainment hotspots are just two quick T stops away.

Sagebrook Development LLC, a local Boston-area development firm, redeveloped Western Avenue Studios and Lofts in Lowell and has now focused closer to Boston to build The Point at 180.  Principal Rebecca Mattson has completed many large downtown Boston development projects over the years since she first lived in Malden Center as a young professional, while working on the Boston Garden. The Point at 180 brings her back to Malden Center, this time creating new housing options for the established neighborhood.

The project is being financed by First Niagara Bank, SoundMark Partners and Whitewood Ventures.