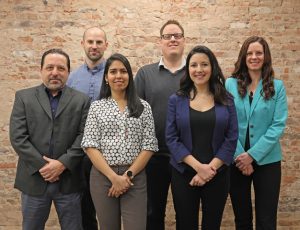 New Haven, CT –  Svigals + Partners has announced the elevation of six staff members to the position of associate. According to the firm’s partners, the decision represents the latest step in an evolution in the Svigals + Partners’ structure.

They join project designer Alana Konefal, Assoc. AIA, who was made associate in 2018.

Chapin is the 2020-21 community director for the AIA-National Young Architects Forum.  She was a key team member for the Sandy Hook School project working directly with the client community, and is currently the project architect on the Bergami Center for Science, Technology and Innovation at the University of New Haven.

Jamilkowski minored in sculpture while earning his degree from Roger Williams University. His portfolio of recent work includes the Bergami Center for Science, Technology and Innovation at the University of New Haven, as well as the health and human services building for Southern Connecticut State University. He was recently nominated for national Outstanding Mentor honors by the Connecticut affiliate of ACE.

Vasquez facilitates coordination and communication among collaborators and project stakeholders.  She recently helped to produce the UConn Health Center renovation, the Strategic Business Office for Yale- New Haven Health, and Ronald McDonald House of Connecticut. She also is a member of the AIA-CT Women in Architecture Committee and a founding member of the soon-to-be-formed Connecticut chapter of the National Organization of Minority Architects (NOMA).

Berger’s work spans across several market sectors as a lead interior designer and project manager.  Her focus is on designing spaces that will enhance a user’s experience and well-being, all while integrating the interior design with the overall project goals. Recent projects include corporate offices for Technolutions and Biohaven Pharmaceuticals, and the new simulation lab and classroom space for Yale School of Nursing.

Rufrano, a LEED-accredited professional,  brings more than two decades of experience to his work, primarily in the design of laboratory and research science spaces, including renovations, infrastructure upgrades and animal habitat facilities. His projects include UCONN’s Beach Hall renovation and multiple Yale aquatics renovations.

The newly named associates represent both the core principles of the firm as well as the diverse range of talent, education, experience and skills the team brings to bear on each project.

“This decision by the partners and principals to elevate key team members to the associate level is a recognition of their critical contributions to our success and continued growth,” says Jay Brotman, AIA, managing partner. “But it’s also more than that: By identifying and investing in the next generation of firm leadership, we are re-committing ourselves to the Svigals + Partners vision of a world of prosperous, compassionate communities into the next generation.”