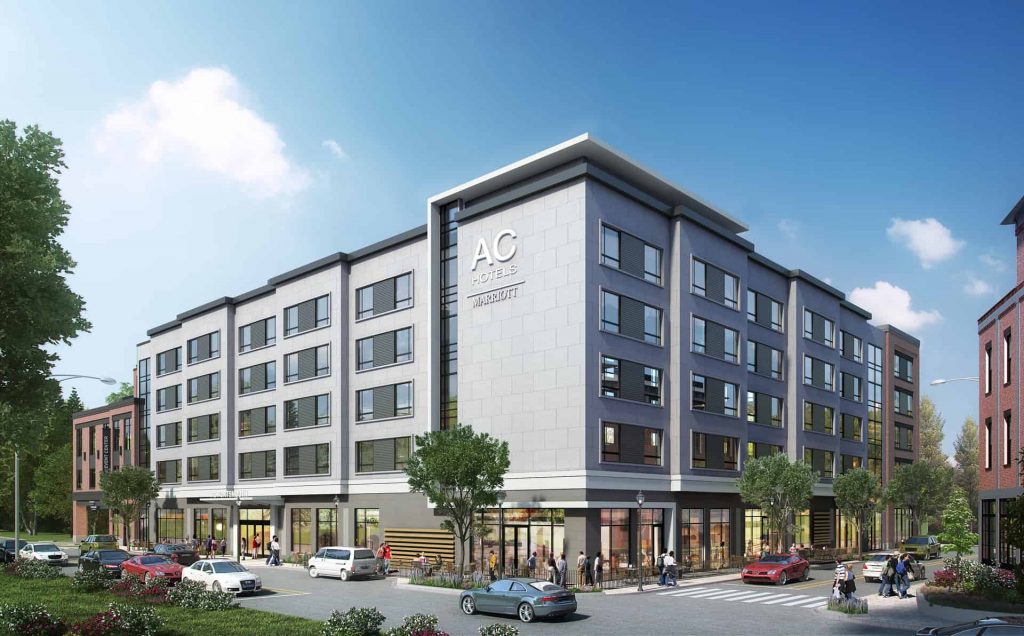 Portsmouth, NH – PROCON of Manchester started construction on the first AC Hotel by Marriott located in the Granite State. The 152,000sf Hotel and Event Center is going up at 299 Vaughan Street in Portsmouth. The project is a collaboration between developers Cathartes of Boston Mass., and XSS Hotels of Manchester.

PROCON also designed the new upscale hotel that will be adjacent to 3S Artspace in the city’s North End and a couple of minutes from the downtown area. Portsmouth-based Colwen Hotel Management will provide comprehensive management services after the hotel opens.

The five-story design features 154 guest rooms in stylish finishes with the AC’s signature wall-mounted workspace and seating bench. The hotel’s décor is modern, high-tech, minimalist, and designed to appeal to Millennials and business travelers. Guest amenities will include a fitness center with a dedicated yoga room, a lounge/bar, a library, a 24×7 market, and 24-hour business center. An additional 2,360sf of first-floor leasable office and retail space will also be available.

The 4,500sf Event Center was designed for companies to host business events, and it subdivides into smaller meeting rooms for private social functions. Plans also include two media salons with collaborative technology and a 1,500sf subdivisible conference room on the first floor. Hotel guests will be able to enjoy a rooftop bar and lounge with views of North Mill Pond.

This project is not the first time that XSS Hotels, Cathartes and PROCON have worked together. Previously, they joined forces on the nearly 400,000 SF Portwalk Place mixed-used development occupying a city block in downtown Portsmouth. Portwalk Place was one of first live/work/play campuses in New Hampshire and was a strategic part of revitalizing the city’s northern tier.

Portsmouth is one of New England’s oldest cities with a functioning deep-water seaport, and its history, culture and smart eateries make it a favorite destination spot. The AC Hotel and Event Center is expected to open in the summer of 2019 and will provide an additional accommodation option for tourists and business travelers to the area.

Renowned Spanish hotelier Antonio Catalan conceived the AC hotels idea that combines modern design with classic European soul and Spanish roots. The fast-growing brand offers concept-driven, turn-key customization of guest rooms and public space design. AC Hotels’ made its U.S. debut in 2014 and currently has 19 opened nationally with another 69 approved in the pipeline.

A key part of the deal between Portsmouth and the project developers is Waterfront Park. The companies deeded an almost one-acre waterfront parcel of land to the city as part of their agreement. In a January 2017 issue of Seacoastonline.com, Cathartes Principal Jeff Johnston commented about the project’s impact on the area saying “The Waterfront Park and Greenway reconnects the North Mill Pond to the North End and offers a wonderful environment to the public for recreation along its pathways, boat launch and scenic vistas. It’s a unique opportunity for the city.”