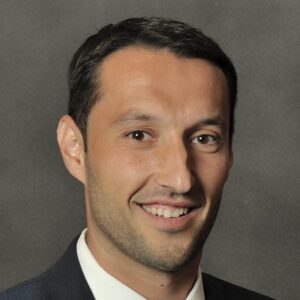 Glastonbury, CT – Gilbane Building Company announced that Kevin Pellegatto has been named Project Manager of the Year by the Associated General Contractors of Connecticut (AGC/CT). He was honored recently at the 2021 Industry Recognition Awards event.

The award recognizes individuals with demonstrable achievements in leadership and professionalism, as well as working practices that reflect skill, integrity, and responsibility. Since joining Gilbane in 2015, Pellegatto has led teams on a variety of projects spanning multiple markets, including healthcare, corporate interiors, higher education, and K-12.

In 2019, he led the FactSet project team on an award-winning 130,000sf global headquarters relocation of 1,000 employees in Norwalk.

Pellegatto is actively involved in numerous charitable events, such as holiday toy drives and charity 5K races. He is also an active member of AGC’s Young Contractors Forum (YCF).

“Kevin’s continued success is attributed to his meticulous attention to detail, his dedication to excellence, and his commitment to both his team and his community,” said John Hawley, Connecticut business unit leader for Gilbane. “His leadership on site ensures the entire project team is working toward a collective goal, allowing us to deliver maximum value to our clients.”