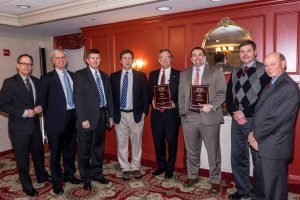 Westfield, MA –The American Council of Engineering Companies of Connecticut (ACEC/CT) honored Tighe & Bond and the Town of East Lyme, CT with the 2015 Grand Award during its Engineering Excellence Awards ceremony on January 12 at the Middletown Inn. Tighe & Bond, a New England leader in civil and environmental engineering, won praise for its design of the $10 million East Lyme–New London water system interconnection that ends more than 20 years of summer water shortages in East Lyme, Connecticut.

Applauded by local and state dignitaries as a model of regional cooperation for its unique water “banking” solution, this landmark inter-municipal project was completed last year, and is the first of its kind in Connecticut. The interconnection allows East Lyme to “bank” excess water from its wells at New London’s Lake Konomoc reservoir and water treatment facility during the fall and winter, when East Lyme’s water demands are at their lowest. Then, during the spring and summer, New London provides East Lyme with water when demands are the highest, and tourist season is in full swing.

“It has been exciting and rewarding to design a high profile water system that has created so many obvious win/wins. East Lyme has gained improved water reliability to meet seasonal water demands though a cost effective design that received financing in part through the State Revolving Fund. The 25-year inter-municipal agreement has provided New London with a new revenue stream. The neighboring community of Montville also has improved public safety/fire protection for emergencies, and the Pattagansett River now has adequate stream flows for fish and wildlife,” explains Paul Malmrose, P.E., a Tighe & Bond vice president and the principal-in-charge for this project.

Five years in the making, the East Lyme-New London interconnection project includes a new 425,000 gallon water storage tank that is the first composite elevated tank with glass-fused-to-steel bowl to be constructed in Connecticut. It also includes two new pump stations to transfer water between East Lyme and New London, as well as four miles of 16-inch water main that traverses three towns. In addition, portions of this pipeline were installed via horizontal directional drilling to minimize the impact on wetlands.

“We know that ACEC/CT looks closely at four criteria to judge award winning projects (exceeding client expectations; social, economic, or sustainable design consideration; originality; and complexity), so we are thrilled to receive this year’s Grand Award,” says Tighe & Bond’s President and CEO, David Pinsky, P.E. “Although we have been providing water resources engineering for more than a century, this kind of recognition – and the opportunity to collaborate with clients like the Town of East Lyme – is always an honor,” he adds.