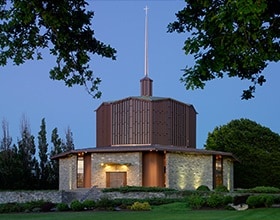 Church of St. Gregory the Great at Portsmouth Abbey / photo by Aaron Usher

Portsmouth, RI – The New England Chapter of the American Institute of Architects recently recognized Northeast Collaborative Architects with the 2016 Honor Award for the preservation of the Church of St. Gregory the Great at Portsmouth Abbey in Portsmouth.

The annual award program, held on September 30 at the Customs House building in Portland, Maine, recognizes design excellence in projects in New England or by New England architects. A New York-based jury met to review 237 entries of varying size and scope.

Members of the design team include Advanced Building Concepts, Odeh Engineers, Newmans, Ltd., Lighting Resource and Design, Artigiano Stained Glass, and Aaron Usher. The project has also earned restoration awards from Faith & Form and the Rhode Island and Connecticut chapters of the American Institute of Architects.

Architect Pietro Belluschi collaborated with sculptor Richard Lippold, craftsman George Nakashima, and glass designer Henry Lee Willett in 1960 to create an icon of ecclesiastical architecture at Portsmouth Abbey in Portsmouth. Church of St. Gregory the Great presides over the private high school campus on a platform and symbolizes the Benedictine Monks’ cultivation of learning, liturgy, and conservation. The octagonal church with a 28-foot clerestory draws inspiration from San Vitale built in Ravenna, Italy in the 1500s. Stone walls, redwood board and batten, stained glass, and copper roofs reflect Pacific Northwestern, Scandinavian, and Japanese design precedents.

The church’s original engineering lacked the lateral stability needed to withstand New England’s harsh coastal climate. Needed restoration was not apparent to casual observers; but chronic leaking that compromised the structural integrity worried the monks and students who prayed there daily. As a result, Portsmouth Abbey launched a seven-year restoration campaign.

The clerestory presented the greatest challenge. Extensive water damage warranted that all 136 of the 28-foot clerestory frames be replaced. Old growth timber was shipped to the site from Vancouver; then kiln dried, milled, primed, installed and painted. To ensure the original glass pattern was not lost, 2,960 pieces of glass that were mounted between the framework were labeled, cataloged, removed, cleaned, and reassembled.

Structural deficiencies also threatened the sculpture. Lippold wove Trinity into space with 22,000 feet of golden wire sewn through aluminum bars on their way from the cross to the church’s columns and ceiling. The 2,000 wires and 5,000 joints make 11 triangular arrays that radiate from the cross suspended 10 feet above the altar across 12,000 cubic feet. Trinity was dusty, corroded and collapsing. Art restorers treated the arrays like boat sails, clamping their ends, then cutting and lowering them. They replaced all the wires on a giant loom, returned to the church, and remounted them all.