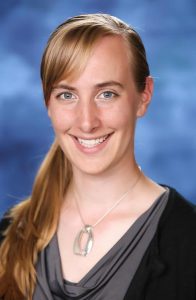 Westfield, MA – The American Council of Engineering Companies of Massachusetts (ACEC/MA) recently named Christina Jones, a project engineer in Tighe & Bond’s Westfield office, the recipient of the 2014 ACEC/MA Young Professional of the Year Award. The recognition took place during ACEC/MA’s Engineering Excellence and Awards Gala in March at the Royal Sonesta Hotel in Cambridge. Each year this competitive award recognizes the accomplishments of one engineer, 30 years or younger, based on their work and its societal impact.

Jones, who is a licensed engineer in Massachusetts, was recognized for achieving significant successes within just five years of launching her civil and environmental engineering career. For the city of Chicopee, she provided construction administration and observation, research and analysis for the first paving project in Massachusetts to implement cutting-edge intelligent compaction technology. The result was a more streamlined, cost-efficient paving process, and better quality pavement that is slated to have a longer life.

Jones is also developing an Integrated Management Plan for Chicopee, and for two of Connecticut’s major water suppliers, she has developed hydraulic models of critical water reservoirs to assess the impact of new fish habitat friendly streamflow regulations on reservoir management. This research enabled her to assist with reservoir management decisions.