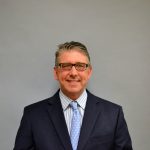 New Britain, CT – Associated Construction’s vice president, Joseph Jankowski, received the Dr. Stuart Bennett Alumni Award for his professional accomplishments and contributions to the construction community. He was recognized on April 20 at CCSU’s annual Construction Industry Award dinner held on CCSU’s New Britain campus. Jankowski, a principal of Associated Construction, began with the firm while at CCSU in 1984 after winning an academic scholarship presented by Associated Construction’s founder, Angelo J.M. Giardini. Since that time, he not only has grown to lead and direct the company’s structural and operational components, but also has been an active participant in the Associated General Contractors of America (CT Chapter), was a contributing member of a Think Tank with the State of Connecticut to evaluate construction scheduling software, and is currently a Cub Scout leader through the Boy Scouts of America. Jankowski is also LEED AP accredited through the USGBC.