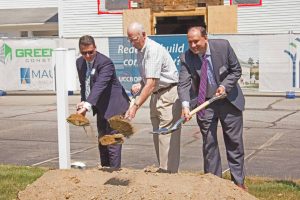 Boxborough, MA – A groundbreaking ceremony was held recently to commemorate the start of renovations to the United Church of Christ, Boxborough’s (UCCB) historic meeting house.

Originally a one-story structure, the meeting house portion of the church’s facility was built in 1833. According to the UCCB, the original post and beam structure was raised in 1880 to expand the building. As with many historical buildings, time has left the building in want of renovations.

“Working with Green Leaf Construction and Maugel Architects, we feel we are honoring the heritage of the 1833 building while bringing it into the twenty-first century,” says Larry Wellington, member and volunteer at the UCCB. 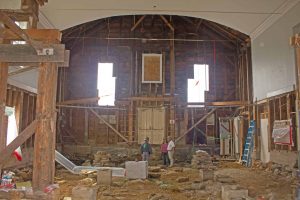 A view inside the meeting house as crews complete selective demolition

Work will include much-needed foundation repairs to bring the building up to code, along with renovations that will make the building fully ADA-compliant. In addition, both the first and second floors of the meeting house will be remodeled to provide ample meeting space and provide a welcoming layout for congregants as well as the surrounding community.

“We’re working closely with Maugel Architects and the UCCB to preserve the historical value of the building. At the same time, we will integrate modern features that will provide lasting structural improvements and enhance access,”  said Green Leaf project manager Cortney Kiewel.

Construction is scheduled to be completed in late fall.