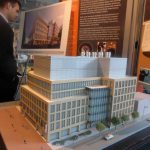 Cambridge, MA– – Governor Deval Patrick and the Massachusetts Life Sciences Center (MLSC)  joined Takeda leadership, industry stakeholders and state and local officials for a groundbreaking ceremony for a new 250,000sf building in Cambridge. Takeda will be the sole life sciences tenant of the new building at 300 Massachusetts Avenue. The expansion will allow for the relocation of Takeda employees from other facilities in and accommodate for future company growth.. The project is a joint venture between the Mass. Institute of Technology (MIT) and Forest City, a real estate management and development company based in Cleveland, Ohio.  Forest City will serve as the managing partner. Takeda entered the Massachusetts market in 2008 with the acquisition of Cambridge-based Millennium Pharmaceuticals, established in 1993 as a genomics company, that specialized in the application of recombinant technology to the discovery and development of innovative new therapies for a broad spectrum of diseases. Today, Takeda is a fully-integrated biopharmaceutical company with a pipeline of more than 15 oncology investigational compounds, as well as one commercialized drug on the market for cancer therapy. The company’s Cambridge location is focused exclusively on oncology with the goal of improving treatment options for cancer patients around the world. Through the MLSC, Massachusetts is investing $1 billion over 10 years in the growth of the state’s life sciences supercluster. These investments are being made under the Massachusetts Life Sciences Initiative, proposed by Governor Patrick in 2007, and passed by the state Legislature and signed into law by Governor Patrick in 2008. The MLSC’s mission is to create jobs in the life sciences – biotechnology, pharmaceuticals, medical devices, diagnostics and bioinformatics — and support vital scientific research that will improve the human condition.

“Cambridge has always been at the forefront of life science innovation, and the expansion into a new facility reflects Takeda’s ongoing commitment to this region as well as the patients whose lives we impact,” said Anna Protopapas, President, Millennium: The Takeda Oncology Company. “Takeda will expand its R&D efforts in several therapeutic areas and take advantage of the established local resources of scientific talent, and potential collaborations with world-leading hospitals, academic centers and biotech companies.” “I am so pleased to be here to celebrate this groundbreaking for Takeda’s wonderful new facility here in Cambridge, and to celebrate the growing relationship between Takeda and the Commonwealth of Massachusetts” said Susan Windham-Bannister, Ph.D., President & CEO of the MLSC. “In this new facility Takeda will continue its groundbreaking R&D efforts in the fight against cancer, right here in Massachusetts. Takeda has played a significant role in making Massachusetts the global leader in life sciences, and now they are further enabling our state to strengthen and retain this position”. “It’s exciting to be involved in a project with partners like MIT and Takeda,” said Frank Wuest, President of Forest City Boston. “Forest City is thrilled to play a role in the economic development and job creation that accompanies life science research like this in the premier market for it in the world.” “I’m pleased to see Takeda making this commitment to Cambridge,” said Representative Timothy J. Toomey, Jr. “They’ve been a wonderful neighbor and partner since they arrived, and they’re an important part of the fight against cancer and the City of Cambridge’s future growth.” “Cambridge is proud to be involved in a project with great economic benefits to the City and its residents and one with great corporate citizens like Forest City, MIT and Takeda,” said Cambridge Mayor David Maher. “This facility will be a great addition to Central Square.” “The City of Cambridge is a community characterized by its thirst for knowledge, entrepreneurial spirit and deep commitment to improving the lives of others,” said Cambridge City Councillor Leland Cheung. “Takeda’s mission of enhancing the health of people worldwide through leading innovation in medicine is a perfect complement to the core values of our city. I look forward to working collaboratively with Takeda throughout the development of their new facility as we further our shared goals for Cambridge, the Commonwealth and the world.”