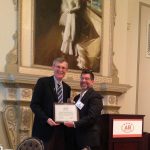 AEI is dedicated to education and other key issues impacting the industry.  The organization is comprised of executive and administrative staff members of NECA Chapters and the National Association, including the NJATC and NEBF.