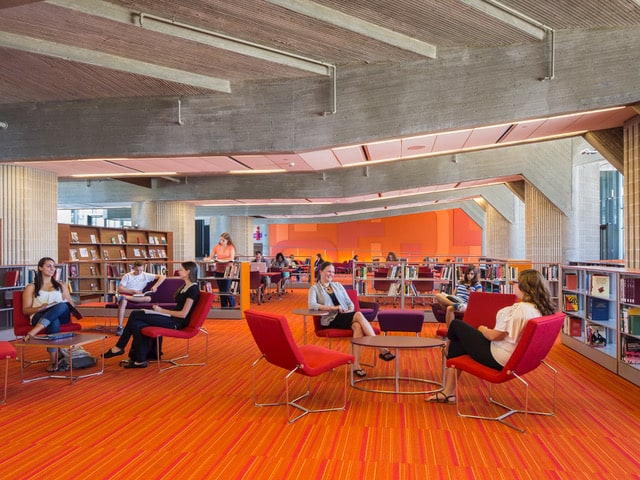 The library is the centerpiece of the campus plan.

Dartmouth, MA – The American Institute of Architects announced recently that designLAB architects was one of seven American firms to win an Honor Award for Interior Architecture. The Boston firm was recognized for its work at the Claire T. Carney Library at UMass Dartmouth.

The university’s goal was to transform the library into a modern hub of knowledge creation, dissemination, and interaction, envisioning it as the intellectual and scholarly hub, all within a $200/sf budget. 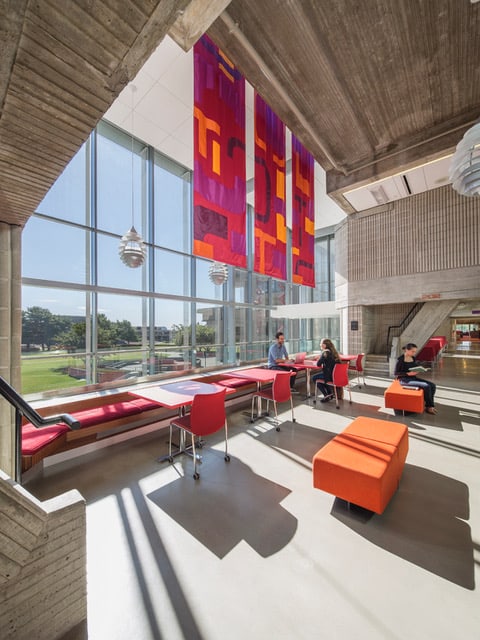 “Our work on the Claire T. Carney Library demonstrates our dedication to the idea of critical conservation,” said designLAB principal Robert Miklos. “Our process involved restoration and interpretation guided by Rudolph’s ideas and intention rather than faithful replication.”

Beginning with research, assessment, and critique of the original artifact, the process involved restoration, interpretation, and transformation guided by Rudolph’s ideas and intention rather than faithful replication.

Vibrant colors and patterns were re-introduced as super-graphics, textiles and furnishings to compliment the uniformly grey interior. Reinvigorating the monumental spaces restores Rudolph’s vision and original palette and recalls the vigor and abstraction of the Op-Art period. The mixture of hues ranges from highly contrasting on the most active lower floors which graduates to a more monochromatic palette on the upper floors. Furnishings in period-inspired fabrics and styles complement the 70’s vibe.

A “CTCL” pattern, derived from the donor’s initials, is used for wayfinding, branding and identity.  Letters are cropped, rotated, and arranged creating a pattern of overlapping, woven figures, reminiscent of period typographic treatments and the University’s heritage as a textile school.

New exterior sun-shading screens are modulated in response to the original concrete fins, as a metaphor for Rudolph’s original polished aluminum interior ‘disco’ curtains, ‘bunched up’ at the entries as they are pulled back.

These interventions fully embrace but respectfully confront the Brutalist structure, framing and amplifying the dramatic composition. Post-occupancy, student surveys confirm that the most economical interventions were the most effective, including enhanced lighting, color, and signage. Most importantly, the current generation of students embraces a 40-year-old artifact, to which they have no direct connection or nostalgia. The library gate count has more than doubled since the renovations.