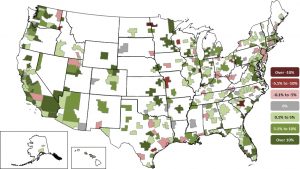 Arlington, VA – Construction employment increased in 269 out of 358 metro areas between December 2016 and December 2017, declined in 43 and stagnated in 46, according to a new analysis of federal employment data released today by the Associated General Contractors of America. Association officials said new infrastructure funding would help ensure firms continue to expand their headcount in 2018.

“Construction employment continues to expand amid robust private-sector demand in many parts of the country,” said Ken Simonson, the association’s chief economist. “But with public-sector funding lagging, there is little doubt that more firms would be able to expand their headcount this year if Congress would enact a substantial boost in infrastructure projects, as many members of both parties advocate.”

Association officials said that firms in many parts of the country have continued to expand as private-sector demand for new construction projects continues to hit record levels. They cautioned, however, that public-sector funding for roads and bridges declined in 2017 making it hard for many firms that build infrastructure to expand. Worse, lagging investments in infrastructure will lead to greater economic inefficiency as traffic grows, bridges age and waterways continue to degrade, they warned.

“One of the biggest threats to the current economic expansion is that our aging infrastructure will cause shipping and traffic delays, which will raise costs, slow schedules and create new inefficiencies,” said Stephen E. Sandherr, the association’s chief executive officer. “Rebuilding public infrastructure will help our economy remain competitive and ensure that construction employers continue to add jobs.”