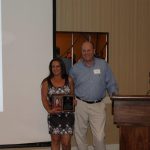 Darcy Carbone is inducted into ASHRAE.

Carbone joined ASHRAE in April 1999 and has since held the positions of attendance chair, chapter treasurer, chapter vice president, president-elect and chapter president 2006-2007. As an active member of the Boston Chapter, she has also been on the board of governors since 2001, CTTC chair, research promotion chair, chapter programs chair, sustainability committee, honors and awards chair and professional development chair, and Boston 100th Anniversary Gala in 2012.