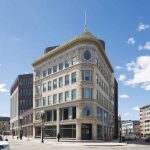 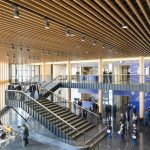 for the grand opening of the Bruce C. Bolling Municipal Building in the heart of Dudley Square. The $125 million state-of-the-art facility is the new home of the Boston Public Schools headquarters and is the largest capital building project the city of Boston has managed since the construction of Boston City Hall.

The project required renovation and new construction of a 215,000sf, six-story municipal office facility as well as community spaces for events, an innovation center, and 18,000sf of ground-floor retail space.

The city selected Boston-based Shawmut Design and Construction as the project’s CM-at-risk contractor. During the grand opening ceremony, Mayor Walsh praised Shawmut for its work on the project and its successful collaboration with the community. Councilor Tito Jackson went on to thank Shawmut for “doing it the right way” by employing residents of Roxbury and completing the project on time and on budget. 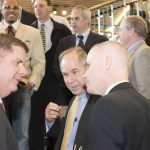 Shawmut was tasked with preserving and restoring three historic structures to create a triangle of historic façades connected by new construction. The firm worked closely with the Boston Landmarks Commission and Massachusetts Historical Commission to ensure the new building harmonized with the original materials, which included early 20th-century brick, a limestone Baroque and Renaissance Revival structure, and an 1895 terra cotta façade. Shawmut was also able to ensure efficiency and quality throughout every step of the project by utilizing building information modeling (BIM) technology.

The project was overseen by the city of Boston’s Property and Construction Management Department in collaboration with the Boston Redevelopment Authority and PMA Consultants. The design team was a joint venture between Sasaki Associates from Watertown and Mecanoo from the Netherlands.