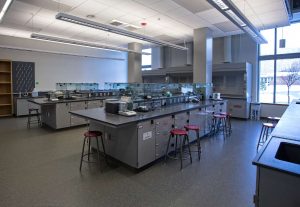 The Beaupre Center houses URI’s chemistry department, along with a federal Center of Excellence for Explosives Detection, Mitigation and Response, one of the county’s most important research and training resources in the war against terrorism.

Among the features of the four-story, 135,000sf center, designed by Wilson Architects Inc. of Boston, with management by Keogh Construction Management of Rumford: 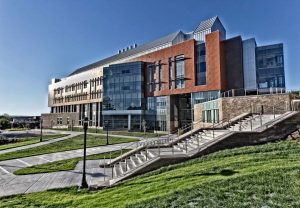 The building exterior features a number of façade materials including gray face brick, manufactured stone, phenolic resin, composite metal panels, and a significant amount of glass curtainwall and punched window opening, allowing for natural lighting and views of the surrounding campus. The interior consists of Nora rubber flooring in all corridors and labs, while carpeting and porcelain tile were used throughout the common areas. The surrounding site was upgraded with new underground drainage, parking lots, lighting, concrete walks, and a large new seating plaza off of the second floor egress.

The building has achieved LEED Silver and is expected to use 50% less energy than comparable existing buildings, resulting in a 20% savings over and above the minimum Rhode Island Energy Code.

“We understood the difficult challenges required of a complex science program within an active campus.  It is a pleasure to now see it complete and occupied by the University.  The relationship between Bacon Construction and the Design Team was very strong throughout the process and the project team Bacon assembled was one of the best that I have been associated with in my 30+ years in Architecture,” said Matt Ellsworth, Associate Principal of Wilson Architects, said in a statement.

“Fostering research, innovation, and discovery is critical to Rhode Island’s future as a center of advanced industries,” Rhode Island Governor Gina Raimondo said. “This facility, along with other recent projects, positions the university to attract businesses, entrepreneurs, and inventors to our state and grow our economy.”

The completion of this state-of-the-art facility symbolizes the latest development in a building boom involving several Rhode Island-based schools that are making significant investments in improved teaching and research capabilities in the STEM disciplines: science, technology, engineering and mathematics.

STEM industries increasingly are seen as a cornerstone of the state’s economic future, replacing the disappearing “traditional” manufacturing that dates to Samuel Slater’s 18th-century, water-powered cotton-spinning mill, preserved now as a Pawtucket museum, which sparked the American Industrial Revolution.

“Science is at the heart of innovation and discovery, and chemistry is the foundation for numerous scientific disciplines,” said URI president David M. Dooley, who remains a research chemist. He called chemistry “the building block and the bedrock for the health sciences, biotechnology, energy, pharmacy, nursing and high technology.”

“We are grateful to the people of Rhode Island for having the foresight to support a project that is directly related to the kind of economy we are trying to build in the state,” President Dooley said in a statement. “This facility will be a cornerstone of discovery and innovation and, in turn, economic vitality for Rhode Island.”