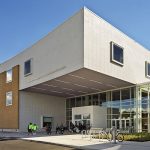 New Britain, CT – Antinozzi Associates of Bridgeport recently completed the new Capitol Region Education Council’s (CREC) Medical Profession and Teacher Preparation (MP-TP) Academy in New Britain. Antinozzi was awarded this $64.5 million project in 2010 and accommodates a 6th through 12th grade teaching and medical program curriculum for 700 students interested in these fields. A pre-kindergarten facility is incorporated into the teaching program for both school and staff use. Classroom and office spaces are arranged along the building’s perimeter with locker and storage space located in the center. The school contains teaching spaces such as a medical simulation instructional space, a medical health center, and specialized laboratories outfitted with state-of-the-art equipment for an interactive and student-centered educational experience. Areas throughout the school were made flexible to meet future middle and high school program needs. 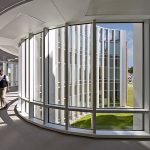 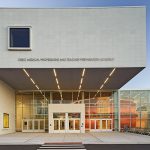 Formerly occupied by a multifamily residential housing complex, the 18-acre property was originally zoned for a larger commercial technical park. The new three-story, 145,000sf facility is positioned on the south and east sides of the site, with the commercial park located to the north and west. The academy has a curved building configuration derived from the site, resulting in an east-west orientation that takes advantage of sun angles to maximize daylight during the winter. This curvature is also mirrored by the three elliptical courtyards located at the core of each level, which brings light and visual connection of all three floors — creating the school’s most distinctive feature.

The building design incorporates several elements referencing both the medical and teaching professions. Its veneer is composed of brick with random patterned lines incised on the surface, suggestive of the lines on human skin. The edges of the unrestrained ends of the brick veneer project 8 inches beyond the normal plane of the building’s exterior to imply a bandage. Three different finishes were also chosen for the white portion of the exterior block surfaces to mimic a “complexion.” The “heart” of the building is the school’s lecture hall, located at the academy’s center and finished with red mosaic glass tiles.

The entrance canopy provides an exposed lobby, allowing a clear view of the lecture hall’s vivid color before entering the rest of the school facility. In addition, both academies are unified by an apple orchard, as apples are known to both “keep the doctor away” and be shared as a common gift to teachers. All of these elements were carefully chosen to fully represent both staff and students. Construction was completed this past summer for the start of the 2014 to 2015 academic year.