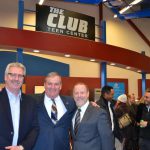 “This is the moment that so many of us have been working toward for several years, dating back to when this building was no more than a dream. Then it became a rendering on paper and then a concrete shell. Finally, here we stand in a new building that will allow the club to double the number of kids that we serve every day,” said James Hoyt, CEO.