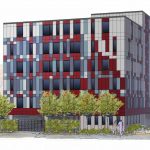 Cambridge, MA – Surviving a three-year legal battle, a protracted recession and a series of complex financing and land acquisition arrangements, a new 40-unit low and moderate income development is finally rising on Temple Street in Cambridge.

Developed by the Cambridge Housing Authority (CHA) on the site of a former YWCA swimming pool just off Mass. Avenue in Central Square, Temple Place Apartments is now in construction for a 2015 opening.

The construction manager for the project is Nauset Construction.

Completing the Temple Place project follows several failed attempts by other parties through two decades to develop the underused YWCA site. Creativity and perseverance on the part of the CHA-led development team and its 13 investment partners sustained the project’s progress at critical junctures.

A 99-year lease agreement for the site was negotiated between the YWCA and the CHA. The lease payments provided stabilization and much-needed funding to the Y to renovate and upgrade its adjacent Cambridge facilities and services.

The deal provided the Cambridge Affordable Housing Corporation, a nonprofit affiliate of the CHA, the rights to build an affordable, high-quality and transit-oriented development in Cambridge.

A diverse group of public and private investors was assembled by the CHA, an effort aided by the City’s ability to provide soft debt and the CHA’s ability to secure 9% Low Income Housing Tax Credits through the Massachusetts Department of Housing and Community Development. The Federal Home Savings Bank and East Cambridge Savings Bank are among the multiple finance partners on the project. An unwavering commitment from the 13 investment and finance partners, each staying with the project throughout the approvals process and surviving a three-year lawsuit by a commercial abutter, was proof of the power of team perseverance.

According to Gregory Russ, Executive Director of the CHA, their support sent a message to skeptics regarding the staying power of the project and its team. “Our funding partners didn’t need to hang in there with us through a prolonged lawsuit. When they did, the message was clear they were intent to see it through. It was a big edge for us to have the funding partners standing firm.” Support from the Central Square Business Association, the City of Cambridge and local community nonprofits, Russ noted, also contributed to the strength and goodwill behind the project.

Developing and building in the densely-settled Central Square community required a successful design appropriate to the neighborhood scale The new residential building fits well into its narrow Temple Place site and helps complete the campus of the next-door YWCA.

“This proved to be the right project in the right location at the right time,” said Lori Cowles AIA, Principal with HMFH Architects and a longtime Cambridge resident. “The social and community value of the Temple Place proposal aligned with neighborhood consensus for what was appropriate to the location, and we were able to design a very efficient, sustainable building that will integrate affordable housing into the City center where it is so urgently needed.”

Cowles and her HMFH colleagues have deep roots in the Cambridge community and in the Central Square neighborhood. A high percentage of the company’s employees live in Cambridge, and the firm’s office is just across the street from the Temple Place project. With 40 plus years as a Cambridge-based company, and their experience working with the City of Cambridge and the CHA on past projects, HMFH helped build and sustain ne

ighborhood consensus for the project. “We look forward to celebrating the opening and occupancy, when we can all say it was worth the wait,” Cowles said