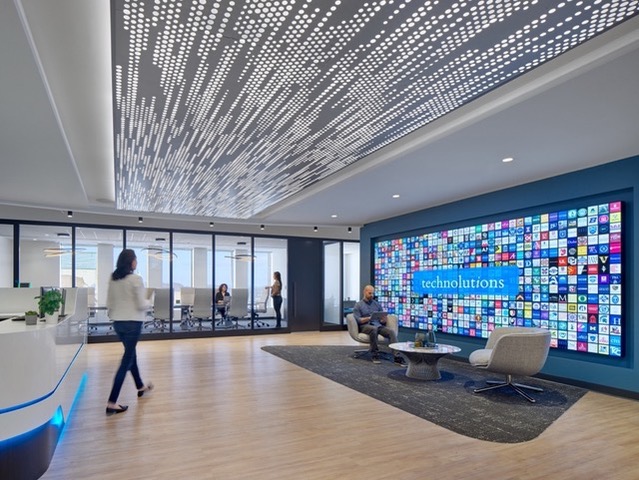 The firm also announced the completion of Technolutions’ new workplace in Portland, Ore. Tasked with concurrently designing both offices in a style that reflects Technolutions’ state-of-the-art product and bold mission, Svigals + Partners worked with contractors and subtrades at each location to execute similar designs with congruous finishes and branding. 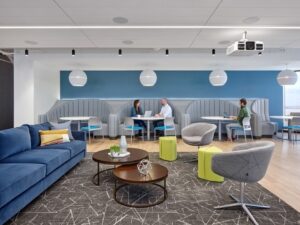 Now located in downtown’s Connecticut Financial Center, the Technolutions headquarters relocated from the nearby Gold Building in a move that allowed the company – founded in 1994 by entrepreneur and philanthropist, Alexander Clark – to consolidate its operations from three separate floors to a spacious and vibrant 21,000sf layout on the 22nd floor. Svigals + Partners’ design of the floor plan and the palette of furniture and finishes served as a model for the company’s Portland office expansion, where Technolutions was planning to expand from a partial floor to occupy the full 16,000sf plate. 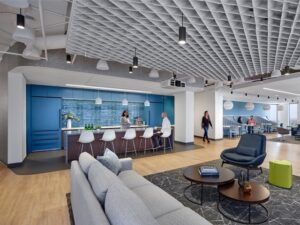 Anchoring both environments is a blue glass-enclosed room used for conferencing and frequent team meetings, surrounded by 40 workstations, call rooms, casual gathering areas, and a breakroom with drop-down projection screens and cameras that capture the entire room for virtual company-wide meetings. Strategically installed speakers and projectors allow for full audiovisual access in all the office and meeting zones.

The experiential lobby includes a perforated metal ceiling illuminated from behind that creates a dynamic effect of a starry sky in motion. Piped-in music and rotating, digital images sustain the futuristic aesthetic, as does the reception desk which, illuminated by colorful LEDs from underneath, seems to be floating untethered by gravity.

For the New Haven location, much of the mechanical, engineering, and plumbing infrastructure also received significant upgrades, and private offices were outfitted with glazing to give internal spaces access to natural daylight and views.

“Bringing this unique vision to life – not in one office, but in two simultaneously – was an exciting challenge,” says Katherine Berger, NCIDQ, WELL AP, Svigals + Partners’ associate and director of interior design. “It was important to establish a visual connection between the two workplaces, so that while separated by a continent, each presents a unified and coherent image of the Technolutions brand to employees and visitors, with a consistent and coherent experience between them.”