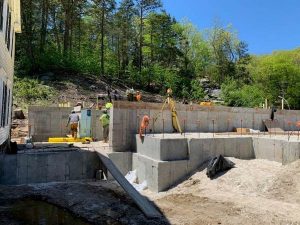 Glastonbury, CT – In the spring, the renovation and addition to the Kent School admissions building marked the 17th shovel in the ground for the S/L/A/M Collaborative (SLAM) design and construction team on the school campus, a private, co-educational preparatory located in northwestern Connecticut.

When the school was founded in 1906, the current admissions building, referred to as “Old Main,” was the original farmhouse on the property.  It was home to the entire school of six students. Over the years the house has undergone a series of evolutions; originally it formed the core of a wood-framed, white clapboard campus complex that was subsequently replaced by the brick Georgian campus, initiated in the 1920s and continuing to the present day. In 1960, the building was moved down the hill to its current location near the main entrance to the campus. Due to complications with the move, the building was placed with the original front door facing the rear of the site. 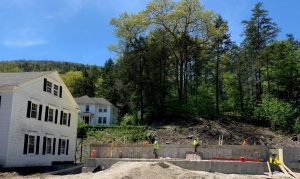 Renovation of the existing structure and excavation for the new addition began in March. / Photos by The S/L/A/M Collaborative

As part of the current renovation project, the SLAM team has updated the front facade to replicate the original front entrance. The building has supported the admissions department for many years.

The renovation to the original 2,500sf admissions building will include new windows, siding, roof, insulation, interior finishes, and sprinklers. The renovated space will feature a welcoming new waiting area with a fireplace, a large new conference room, a new multi-level open stairway, and elevator connecting to the new addition and upper floors.

The new 2,500sf two-story addition connects to the existing building with an elegant porch and patio, reflective of the school’s period architectural style. This entry level ties the two structures together and blends into the hillside and surrounding campus. The new addition will include admissions department offices and interview rooms, a small event space doubling as a conference room, and a large interview room to support the growing demands of the department.

The renovation of the existing structure and excavation for the new addition began in March 2020, before the implications of the COVID-19 regulations were fully initiated. The SLAM Construction Services (SLAM CS) team has worked with the school to make the construction site safe for students, staff, and subcontractors.

The new concrete slab has been poured, the elevator shaft has been constructed, and structural framing has begun. The implementation of prefabricated light gauge steel framed wall panels will expedite the overall schedule by two weeks.

This project has been selected by The Hartford Insurance Company as a pilot for Triax Technologies’ new Spot-r safety program that electronically monitors every individual on the construction site. The software allows the on-site superintendent to monitor location, falls, and equipment use. In addition to this risk mitigating tool, SLAM CS has implemented all required construction site health precautions as per CDC guidelines.

The school plans to showcase the new admissions building this fall, welcoming back returning students and accepting new ones.