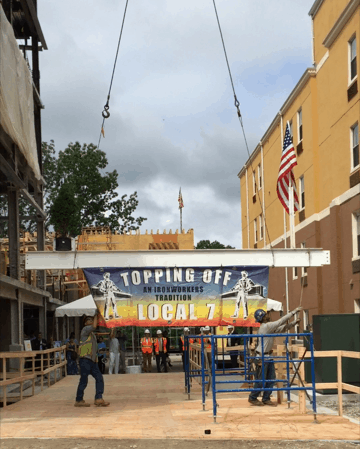 A large steel beam, painted white and signed by workers and others attending, was hoisted to the top of the new residential building, with U.S. flag and traditional “roof tree.”

The architect is Prellwitz Chilinski Associates of Cambridge. Landscape design, including design of the interior courtyard, is by Copley Wolff Design Group. Leasing and property management is by Greystar. The general contractor is Suffolk Construction. The lenders on the project are US Bank and Parse Capital. 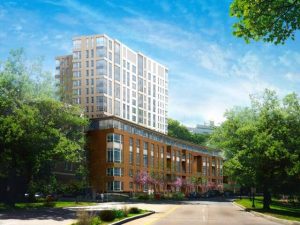 The project will consist of approximately 246,186sf of gross building area including the 106 parking spaces and retail space.

The residences on South Huntington Avenue will open in spring 2017.

Multiple transit alternatives will be available at Serenity, including easy public transportation access to the No. 39 MBTA Bus and E Branch of the Green Line at Riverway and Back of the Hill stops. Serenity will feature Zipcars, electric car charging stations, bicycle storage, as well as nearby public transportation and a Hubway station.

Longwood Group is committed to using the most progressive and environmentally friendly practices for construction and unit design. The roof will have highly reflective material in addition to having drought-tolerant native plantings.

Units will have water-flow efficient kitchens and bathrooms in addition to some of the most efficient windows and appliances available. The building’s energy recovery system will capture and utilize recovered energy that the building emits.

These units will have a separate private elevator and be more secluded while offering exceptional park views relative to the other units. This portion will include primarily two and three bedroom units, with larger square footage as compared to the tower unit footprints.

The mid-rise/interior portion will contain units offering both city and park views in addition to the courtyard views. These units will contain primarily studio, one-, and two-bedroom floor plans.

Golden said Mayor Martin J. Walsh regretted he was unable to attend. “It’s my honor to fill in on his behalf, as we mark this important milestone on the way to completing 195 new units of housing in Jamaica Plain.”

“We’re in the midst of one of the biggest building booms, if not the biggest boom, in Boston’s history,” Golden said. “It’s thanks to the hard-working women and men of the building trades that we’re able to sustain this pace of growth and continue to build a vibrant city for generations to come.

He said the “Serenity” name reflects its location. “Residents living here will have beautiful, unobstructed views overlooking Olmsted Park and the Longwood Medical Area. … I know we’re all probably rethinking where we want to live right now.”

Golden said the South Huntington Avenue area “is a great alternative to some of the busier places, such as downtown, with easy access to transportation. We hope this spot will be an especially good fit for families, young professionals, and medical professionals who work in the area.”

Golden thanked the Longwood Group and Nader family for its commitment to sustainable building. “This building will be LEED Silver certified. Boston has been recognized all over the world for our sustainable building policies … you’re setting a great example for the development community.”

Anthony Nader, Principal of Longwood Group, welcomed the many visitors to the 11 a.m. event and called it “a special day.” “Ralph [Cole] and our team have really kept this project moving along efficiently, with some welcome help from Mother Nature, and it won’t be too many months before we welcome new residents to Serenity and Jamaica Plain,” Nader said.

Nader thanked Sanchez, O’Malley, Golden and the BRA staff, as well as neighborhood supporters including Rouse, Mission Bar and Grill owner Michele Soltani, Pat Flaherty of the Mission Hill Neighborhood Housing Services, Dermot Doyne, Toni Komst, Maria Sanchez, and Theresa Parks for their support in getting the project off the ground.

“And I’d just like to give a deserved shout-out to my son, Anthony [and] my nephew Michael, who have done a great job and live this project every day,” Nader said