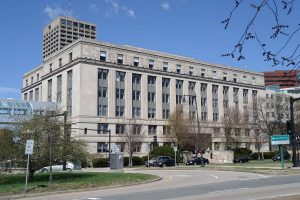 Electrical distribution is delivered from a 13.8kV substation, via 75 distribution panels, which the Ostrow team wired and installed throughout the building.

The complete restoration of the 143,950sf building included construction of a new, 20,000sf seventh floor glass-enclosed addition, which doubles the size of the MIT Faculty Club and also houses a new conference center.

The building’s elaborate access control security system consists of 127 doors at the facility armed with card readers and access control.

The building showcases an MIT Percent-for-Art lighting piece designed by artist Leo Villareal. The work features 240 hanging, 9-foot LED rods arranged from the ceiling in the north vestibule. The lights cycle through a randomly generated series of combinations.

Ostrow Electric supported the installation of the fixtures, installing power and communications wiring to allow function and control of the cascading element of LEDs.

The facility’s new emergency power system is tied into an emergency generator in a neighboring MIT building through a load sequencing system.

The interior lighting package is  comprised of 2,800 lighting fixtures of 100 varying types. Energy-efficiency is central to the facility’s lighting design as LED lighting fixtures account for nearly 50% of the building’s interior lighting. In addition, daylight harvesting and occupancy sensors are installed in virtually every room of the facility.  State-of-the-art lighting control is provided through Ostrow’s installation of a Lutron Quantum lighting control system. Exterior facade lighting was also installed.

Ostrow Electric’s Project Manager Sam Ostrow and General Foreman Peter Valinski managed a field crew of 50 IBEW electricians at peak construction in the two-year project, which was completed in December 2015.  MIT’s Sloan School of Management and Department of Economics took occupancy of the facility in January 2016.

“Ostrow Electric is proud to have been a member of the project team that met the challenges in the renovation of the historic MIT Sloan building,” said PM Sam Ostrow. “The project required close coordination among all subcontractors and the construction manager, Consigli Construction, on an aggressive schedule.  Consigli managed the project adeptly, especially given the overall challenge of a complete renovation in a large, fast-paced project of the historic building.”