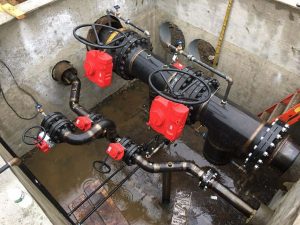 “The project was originally scheduled to be done during the summer, but unfortunately was delayed in being awarded, so subsequently, the work was commencing at the same time the university was gearing up for the fall semester. Shutting down the North Campus steam plant for a few months was no longer an option,” stated Robert Dejadon, N.B. Kenney’s VP of special projects.

Utilizing a little creative ingenuity, N.B. Kenney engineered a way to install the new system vaults and pipe systems while leaving the existing system active. However, this required a four-day shutdown of the North Campus Power Plant, impacting the entire North Campus.

The shutdown work involved crews working continuously around the clock in 12-hour shifts starting on Friday so the power plant could be brought back on line for the start of school on Tuesday.

“I was very proud of the extensive planning and flawless execution exhibited by our management team and field installation crews,” said Dejadon.