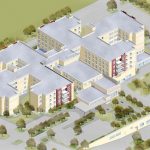 Bridgeport, CT – The final steel beam for the new $75 million, 372,000sf Jewish Senior Services building on the Harry and Jeanette Weinberg Campus was hoisted by crane and put into place during a special ceremony on January 22.

The building will include Connecticut’s first “Household Model,” a new nursing home that is much more residential and “homelike” and supports the philosophy of resident-centered care.

KBE Building Corp. is construction manager at risk for the project.

In keeping with its tradition of jobsite safety, KBE has partnered with OSHA to help facilitate voluntary health and safety improvements during the 22-month project, which is scheduled for completion in April 2016.

The project is designed by Perkins Eastman Architects.