Metro Walls received the Excellence Award in the Institutional/Public $5-10 Million category for its role in the construction and completion of Morse High School in Bath, Maine. The 289,000sf building, which will accommodate students from Bath and seven surrounding towns, includes a two-tiered auditorium, two gyms, and vocational school with cosmetology and culinary divisions. 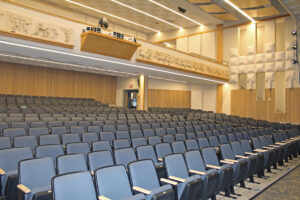 In addition, Metro Walls received the Merit Award in the Commercial $2-5 Million category for its role in The Orpheum Apartments project located in Dover. This 157,000sf, 5-story building includes 130 apartment units, nearly 100 covered and surface parking spaces, a rooftop lounge and terrace, and panoramic views of downtown Dover. Among the high-end finishes, wooden ceilings were installed in the
main entry showcasing the intricate acoustic work of Metro Walls’ ACT team.

“We are excited to be chosen as the recipient of two distinguished ABC awards,” said EVP of Metro Walls, Bryan Hussey. “To be recognized by our industry peers for our team’s workmanship, collaboration, and dedication to the success of these projects is an honor and a recognition we are extremely proud of.”

The Excellence in Construction Awards (EiC) honors contractors for their innovative, complex, and high-quality construction projects measured by a variety of criteria including safety, complexity, attractiveness, unique challenges overcome, cost, and completion time. The EiC awards honor all members of the construction team including contractor, owner, architect, and engineer, and the winning projects were selected by a panel of judges made up of industry experts.