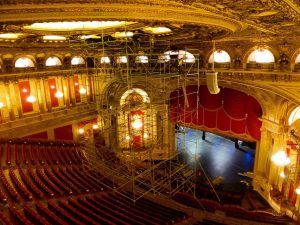 Since opening its doors in 1928, the Boston Opera House (originally known as the B.F. Keith Memorial Theatre) has celebrated dignitaries and some of the greatest performers of all time.

Located at 539 Washington Street in Boston, the theatre was designed by architect Thomas White Lamb in a combination of French and Italian styles.

In 1995, the theatre was placed on the National Trust for Historic Preservation’s 11 Most Endangered Buildings list; in 2002, the theatre underwent an 18-month renovation and restoration project that included restoring everything from the proscenium wall of the stage to the Washington Street façade, meeting with the standards for historical preservation of the National Park Service and the Boston Landmark’s commission.

Nearly 88 years after its opening, the performing arts venue remains stunning from every angle and elevation to the delight of its patrons.

Naturally, the Boston Opera House is not immune to developing visible signs of aging, and efforts are continually made to preserve its beauty. In order for general cosmetic repairs to be done on select areas of its ceiling, the theatre contracted with Marr’s Scaffold Division in July to install a 1,225sf scaffold platform 55-ft. to 75-ft. high above the orchestra and mezzanine levels.

A crew of four scaffold erectors spent eight days installing the scaffold, carefully working around the existing theatre seating at varying elevations. The scaffold was in use for one week. After repairs were completed, the crew dismantled the towers promptly in order for the theatre to prepare for musical artist Jill Scott, who was set to grace the stage in mid-August.