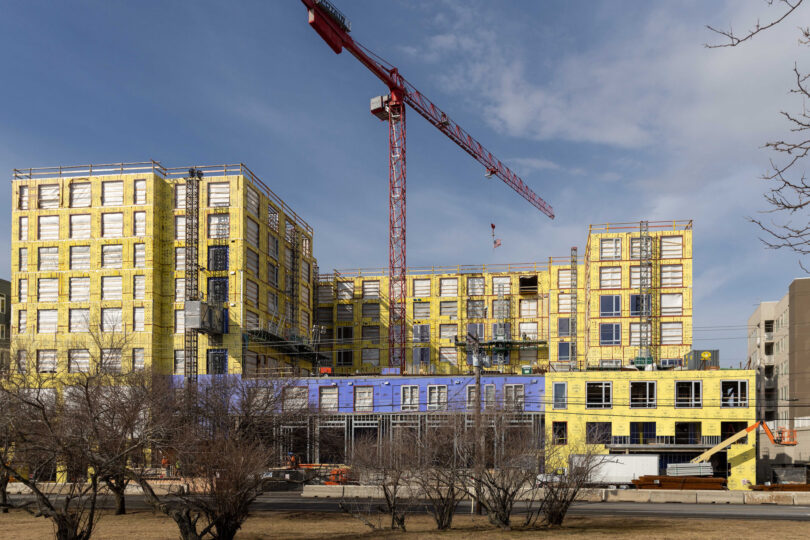 Marr installed multiple mast climbing work platforms and a construction elevator on the waterfront side of The Robinson in Revere.

Revere, MA – The Marr Companies announced it is providing services for a new 200+ unit residential apartment complex named The Robinson, currently under construction on Ocean Avenue across from Revere Beach in Revere.

This 12-story waterfront building marks the final project in Revere’s Waterfront Square, a development two decades in the making. Working for general contractor Plumb House, Marr Scaffolding Company and Marr Crane & Rigging are temporarily wrapping the building’s exterior facade with an elevator, mast climbing work platforms and suspended scaffold work platforms, all for use by multiple trades during construction. Both the mast climbing platforms and suspended scaffolds are being used to construct the facade consisting of metal panels and windows. 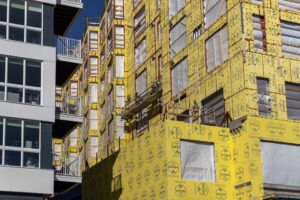 Suspended scaffold work platforms were installed for work conducted in areas with a tight footprint.

Last December, Marr began the equipment installation on the waterfront side of the building with a single Champion elevator and the first of 12, F-200 mast climbing platforms. Using a tower crane, half of the mast climbing platforms were installed on a third-floor roof deck and courtyard area, where a pool and other amenities will eventually reside, while the remaining six units were installed at ground level at the rear of the building. Three of the 12 units are electric powered, producing zero emissions while enabling tradespeople to conveniently plug in and power their tools while working. The elevator will operate on site for nine months, and the mast climbing platforms for approximately six months.

In February, Marr began the installation of 10 suspended scaffolds on the remaining sides of the building that closely abut other project buildings. The width of suspended scaffolds is narrower than mast climbing platforms and allows for greater maneuverability required by tradespeople, particularly in tight spaces. They will be in use for approximately six months.