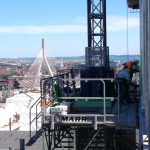 This project represents one of many that are set to transform the skyline along the Charles River with the development of the North Point neighborhood, a mixed-use community, which will be a first of its kind in the area.

Last spring, MC&R’s crew began its initial work on the project with the installation of twin 7,100 lb. Champion elevators to the northwestern face of the building. After the hoists and cars were erected, MSC’s project management team determined that Hydro Mobile mast climbing work platforms would offer the most effective and safe access for IBG and TJM to install the drywall, glass, and curtain wall.

Accordingly, MC&R and Hydro Mobile division crew members installed nine Hydro Mobile units, all of which provided the subcontractors necessary support of materials and personnel to make effective progress throughout the summer and fall.

Currently, work on the NorthPoint residential building continues. MSC will install a twin Hydro Mobile unit where the construction elevator had been located in order for IBG to install its last curtain wall on the building.

This unit will remain in use from December to March of 2015.

A variety of cranes would be needed to safely lift the hydro mobile work platforms and rig them into place. The first two installations were straightforward but the following four required the use of Marr’s 300-ton crane, which was able to achieve a 175-foot reach to lift and rig the 8,500 platforms into place at the highest possible point. Marr’s all-terrain 90-ton crane was brought in to carry out the most challenging of installations, which were the two units positioned in a space less than 18 feet wide between the building and the Prison Point Bridge.

Utilizing technology as well as the expertise of MC&R’s operator, the boom was successfully maneuvered in between the bridge and the building, allowing for a successful installation of the remaining At this writing, seven of the nine Hydro Mobile units have been dismantled. The final dismantle will consist of two units that will remain for an extended period. In order to successfully dismantle given the site conditions, the company will utilize Marr’s 300-ton crane to take down these units.