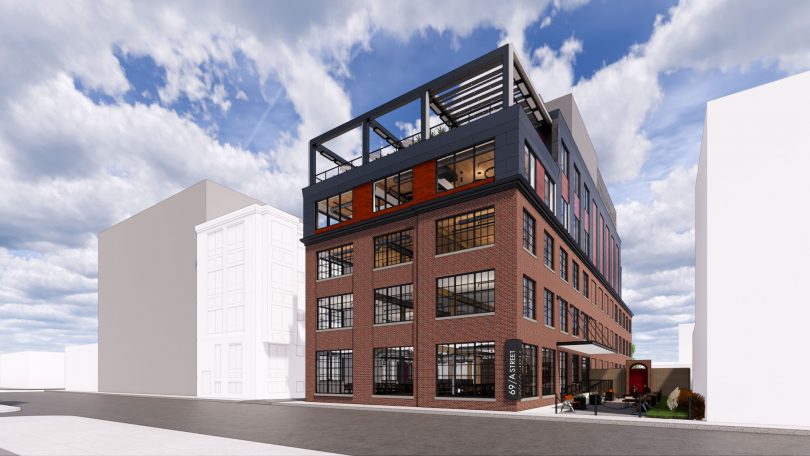 Boston – Margulies Perruzzi (MP) announced that it has utilized cross-laminated timber (CLT) to add two stories to an existing 1920’s era brick and beam building at 69 A Street in South Boston, creating a five-story 45,000sf building which is a hybrid of historical and new construction. The building has been designed to accommodate either a single tenant or multiple tenants.

Originally the home of the Standard Rivet Company, the building was designed for industrial use with three floors and an unfinished basement. With some of the original windows – single pane with steel edging – still in place, MP was able to reference the original architecture to guide placement for building core volumes while maximizing window opening percentages.  A long and narrow rectangle with 7,500sf floor plates, the layout of the building presented a challenge from the start.

The design team decided to add two floors and selected CLT for its construction, aligning with the industrial brick and beam nature of the building. The exterior skin of the new levels is a metal panel rainscreen system installed with exposed metal fasteners that speak to its original use. Leaving the CLT exposed on the upper floors creates a much more appealing exterior than standard steel construction.

Cross laminated timber is a processed timber product of superior strength and stability that offers unique new possibilities and unparalleled advantages in wood construction. Nordic X-Lam from Nordic Structures is made of at least three orthogonal layers of graded sawn lumber that are laminated by gluing with structural adhesives.

Wood is five times lighter than concrete and 15 times lighter than steel so MP was able to retain the existing structure and it did not have to replace or reinforce the existing foundations before adding two stories. Additional benefits of CLT are the inherent fire resistance  properties and a natural wood ceiling that can be left exposed to create a warm finished aesthetic.

Two new vertical stacks were introduced into the floorplate: the first is nestled in the middle of the building, with vertical circulation and a bathroom core; and the second, an egress stair, located in the back corner. Both stack elements doubled as seismic code elements without impacting the floor plate or building aesthetic.

The main entrance access is located off A Street next to a “vest-pocket” park and features interior elements that relate to the industrial nature of the building such as a custom reception desk with weathered zinc panels and blackened steel. The front half of the first floor looks out on A Street with large windows featuring a lowered sill for greater connectivity to the street. The fifth floor has a street-facing outdoor terrace accessible directly from the office space with views of the evolving West Broadway neighborhood and South Station skyline.