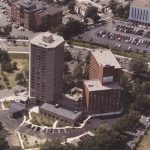 As general contractor for the $1.7 million, 6,000sf phase at the Tower One senior living facility in downtown New Haven, KBE converted three studio apartments on each of eight floors into two one-bedroom apartments per floor. Eight of the apartments are 100% handicap accessible.

This is the eighth phase of KBE’s work at Tower One, with more than 100 units converted to assisted living units.

Designed by architect Charles Moore, Tower One has provided Connecticut seniors with a safe, pleasant living experience since 1971.

In 1982 an adjoining tower, Tower East, was built to expand the urban campus community, located at 18 Tower Lane in New Haven.

During prior building phases, KBE constructed a new drop-off and main entrance area, added an exterior elevator, and created an additional floor for resident services and administrative space.

Additional grants are pending approval by the U.S. Department of Housing and Urban Development.

KBE also donated $50,000 to the Tower One/Tower East Wellness Initiative as part of its corporate philanthropy program 50 Ways to Make a Difference. The funds have been used to develop and implement a comprehensive wellness program for its elderly residents.

Established in 2007 to celebrate the firm’s new ownership, name change, and 50 years in business, 50 Ways has allowed KBE staff to donate more than $1.2 million and 5,000 volunteer hours to charitable causes that benefit various groups, including seniors, children, and military veterans.

In 2014, KBE is focusing its philanthropic efforts on technical high school students. On June 9, the firm awarded $17,000 in scholarships to 34 graduating seniors pursuing higher education in construction and related skilled trades.