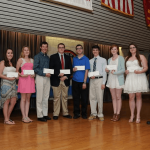 Boston – IBEW, Local 103, held its 37th Annual Pin Night at its headquarters in Dorchester on June 24, 2014, to recognize the years of service of its members and present scholarships to 10 deserving children of Local 103 Members.

Scholarships were presented to 10 high school seniors who each received $10,000 and were selected among more than 100 applicants. The students were chosen based on their academic excellence and an application process. The scholarship award recipients include:

Michael Monahan, Business Manager, IBEW, Local 103, said, “I want to thank all the hardworking men and women of Local 103 for their involvement, vision and sacrifices and making this one of the best construction local unions in the country. It is the hard work of the members that makes it possible to provide a total of $100,000 in scholarships.  We also have one of the strongest pension funds in the country. The average member retiring receives $80,000 a year in pension checks.”

Scholarship recipient, Paul Hanlon, Jr., of Rockland, Massachusetts, is attending Bridgewater State College in the fall for Computer Science. His father, Paul Hanlon, has been an IBEW, Local 103, member for 34 years.  Hanlon, Jr., said, “I was so ecstatic when I found out that I received a $10,000 scholarship to help with my college education. I am so grateful and appreciative to IBEW, Local 103, and all they have done for my family. “

Sara Crane of Abington, Massachusetts, is attending Curry College for Nursing. Crane’s father, Joe, is a member of IBEW, Local 103. Crane said, “I was so excited. Thank you to IBEW, Local 103, for helping my family, especially for awarding me this generous scholarship. I am definitely a big supporter of unions and what they stand for!”

The evening concluded with Pins being awarded to 257 members of IBEW, Local 103.  Eileen Henry of Weymouth, Massachusetts, received her 20-year pin. Henry said she is a third generation IBEW, Local 103, member and chose a career as an electrician following in her father and grandfather’s footsteps.   Henry said, “I love my career and the opportunities and benefits provided by IBEW, Local 103. I have been able to earn a great living to support my family and Local 103 is welcoming to women pursuing their career as an electrician.”