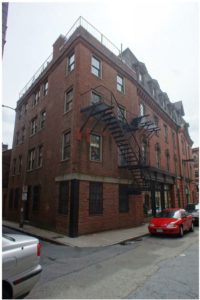 The existing building at 39 North Bennet St., formerly occupied by the North Bennet Street School, was a combination of three interconnected buildings. The floor plates were mismatched across the three structures, and small sets of transition stairs wove the buildings together. 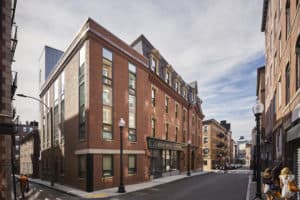 The school after renovations

Construction manager Colantonio Inc. was recognized for its involvement in the complete rehab of the school.

“The school today provides a total of 42,000sf of light-filled, well-organized educational spaces,” noted Christopher Lane, senior associate at Finegold. “In addition to the multi-purpose room, cafeteria and administrative offices, the new school provides 21 general purpose classrooms; specialty counseling spaces; two SPED classrooms for 10 students with dedicated computers; and two enrichment classrooms, one for visual arts and one for technology/robotics.”

Two new stair towers, an expanded roof monitor, enlarged window openings, and restoration of the historic facades and roof dormers create a sensitive blend of old and new in the transformation of the school. All new HVAC, electrical, plumbing, fire protection and life-safety systems were installed.

The project was funded through Mayor Martin J. Walsh’s Capital Plan and the total cost was $19.7 million.

“The Eliot Upper Innovation School is a success story that demonstrates what can happen when a community works together to solve problems,” added Alexander. “The original Eliot Innovation School has been located at 34 Charter St., Boston, since the 1930s, and the institution itself is believed to be Boston’s oldest continuously run school.  The school has undergone a transformation since 2007. It went from an under-performing school at risk of closure into a Commendation School that is thriving and growing.

Increased enrollments drove demand from parents to expand the school and the City of Boston’s Public Facilities department began the process of identifying potential buildings and sites to accommodate the growing school. Those studies that led to the identification of 39 N. Bennet St. as a location for expansion.”

The Mayor Thomas M. Menino Legacy Award recognizes projects that are transformative, catalytic, embrace the community, create partnerships and revitalize the best of the past to pave the way for the future.

“We know that Boston Public School students deserve the best, and our investment in this school is a testament to how we value public education in Boston,” said Mayor Walsh. “This new space brings the Eliot School into the 21st century and creates the best learning environment for our students. I’m proud that as a city, we’re making investments that will allow students to achieve their full potential.”

“A school reflects the heart of a community, and we gave the building a heart,” said Alexander. “The central organizing space is a double-height multi-purpose room. Classrooms ring this new heart which sits on the foundations of a former church (1832) that once occupied the site.” The design creates a dramatic welcoming entryway for students, parents and the community, and embraces the memory of the site.

When schools are at their best, they are hubs of connectivity for children, their parents, grandparents, and caregivers, and they provide an important community resource to foster partnerships and community education, among others. To date, the Eliot has partnerships with 30 different organizations. “We are so thankful that this school, as well as the building, will serve as a hub for education and collaborative learning opportunities while also contributing as an anchor of this community,” said Traci Walker-Griffith, principal of the Eliot Innovation School.