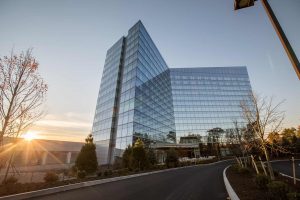 Kohn Pederson Fox was the architectural firm for the project. 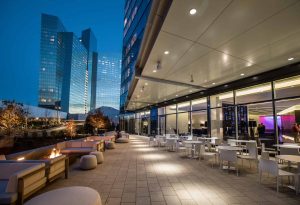 The post-tension concrete superstructure is clad in 14 stories of glass curtain wall complementing the striking façade of the adjacent Sky Tower.

Guests at the new 242,000sf Earth Tower can expect state-of-the-art amenities in their rooms including smart light sensors that detect when they enter or leave and that will have iPad-controlled lighting, climate adjustment, and room service. The building’s lobby features the Bean & Vine Café & Wine Bar, and it extends to an outdoor patio with seating and fire pits. Additional amenities include a spa, fitness center, and swimming pool.

The Earth Tower has supported the local economy, with more than 1,000 construction and permanent jobs

“A/Z is proud of our relationship with the members of The Mohegan Tribe. It was a pleasure working together on this signature project and we look forward to furthering our partnership in the future,” says Lorenz.

Mohegan Sun Vice President of Hotel Operations Abu F. Hogue says “I have opened six major hotels in my career and this hotel opening was the smoothest by far.”

“Demand for the hotel’s rooms has been incredible.  From the day it opened the hotel has been running at full capacity,” says A/Z Director Bob Gervasini.

Hospitality is one of many specialty markets that A/Z Corporation serves. Others include healthcare, higher education, life sciences and research, manufacturing, mission critical, utilities and CHP and corporate and institutional.