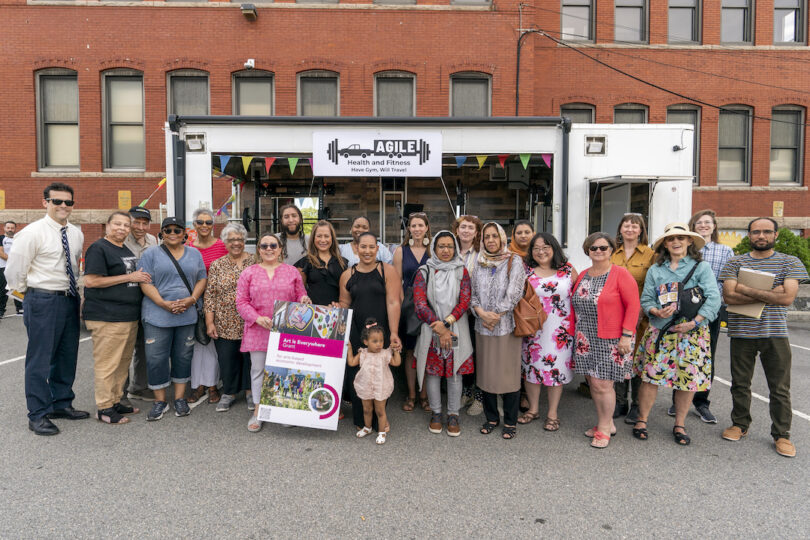 New Bedford, MA – New Bedford Creative introduced the “Art is Everywhere” grant recipients for arts and culture projects in the city of New Bedford this year on June 10.

Seven applicants have been selected to share $70,000 in funding to realize their vision and bring their projects to life in the city. This is the third year “Art is Everywhere,” administered by New Bedford Creative on behalf of MassDevelopment and the Barr Foundation, has supported projects that seek to define and enlarge the scope of creativity in the city.

This year four of the seven are first time recipients of New Bedford Creative funding, and six are new to Art is Everywhere. Five are receiving full funding for their projects. Additionally, five represent the impact the city’s Black, Indigenous, and People of Color communities have made and are making in the city.

New to “Art is Everywhere” this year is Dil ba Dil Rah Dhara (From One Heart to Another): The Afghan Women’s Art Project which will be presented in partnership with the South Coast Afghan Welcome Network (SAWN) and the New Bedford Free Public Library with the support of $11,600.

La Soul Renaissance will celebrate its 20th anniversary with special programming to celebrate the local Cape Verdean, Black, Indigenous, Caribbean, Immigrant and wider community about the value of the cultural memory at Verdean Veterans Memorial Hall with $13,000.

The bilingual Yoga series, Ease into Summer Kids, will be launched by Tahais Real-Martins of Yoga Es Vida at New Bedford Parks with $6,000. David Andrews and The Communal Space will host Kids Open Art Week with a $3,400 award.

The heritage of New Bedford’s Abolition movement is recognized by two projects. The Massachusetts Design Art, & Technology Institute (known as DATMA) project will use $6,000 to place “Safe Station: New Bedford’s Underground Railroad” at the New Bedford YMCA. And, the New Bedford Historical Society’s Abolition Row Park will dedicate $20,000 towards its Frederick Douglass Memorial at the park.

Finally, the pairing of food and creativity will be showcased by Coastal Foodshed at farmers markets throughout the city with $10,000 in seed money.