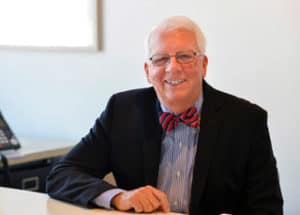 His 50-year career has influenced the historic preservation community in myriad ways.

“Jim’s impeccable ability to discern what should be preserved and that which can be adapted provides the maximum benefit to clients, agencies, and the community. His role has been pivotal in saving and adapting some of the Commonwealth’s most significant historic structures,” explains Tony Hsiao, director of design at Finegold Alexander.

Many of his projects have proven to be anchor projects that led to the revitalization of neighborhoods that were neglected or abandoned such as the Newburyport Downtown Master Plan; 226 Causeway Mixed Use Development in Boston’s Bulfinch Triangle; 2 Clarendon Square and Penny Savings Bank Residences, both in Boston’s South End; the Cable Mill Residences in Williamstown; and the Holyoke Public Library, among many others.

In addition to his 50 years as a preservation advocate and architect, Alexander continues to serve as a mentor, thesis advisor and guest critic to many young architects. Over the years he has opened the firm to school and youth programs to introduce young people to architecture, design and preservation.