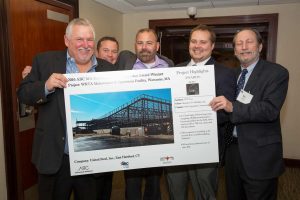 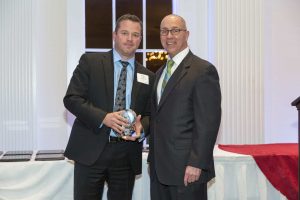 Each award was presented to United Steel during the last quarter of 2016.
-more-
This is the third year in a row United Steel received recognition for mid-sized businesses in the Greater Hartford area.
As part of the structural steelwork for the new 151,000 sf Worcester Regional Transit Authority’s maintenance and operations facility, United Steel manufactured and installed a 48,000 lb steel truss that was 17 feet high by 80 feet long.  USI worked outside the building footprint (an unusual process) to install this large piece, relocating its 250-ton crane (with 200-foot boom) to eight separate locations to complete the job.
United Steel hosted community tours of its state-of-the-art 175,000sf automated manufacturing facility (including new contamination-free “clean room”), and hosted product demonstrations from leading manufacturers and suppliers throughout the region.  United Steel also brought together industry leaders from the global manufacturer Hilti Corporation, Infra Metals, Canam, Max Weiss, Maine-Oxy, Airgas, Atlantic Fastener, Ct. Galvanizing, MSC, UCONN and the U.S. Army to discuss the state of the vital steel trade industry.
“This has been a very productive and exciting year for our company and these three awards reflect the hard work and dedication of everyone at United Steel,” said Ken Corneau, president of United Steel.  “The construction industry is full of many talented people and companies, so we greatly appreciate being recognized among some of the finest.”