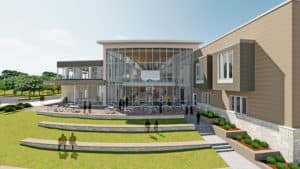 Weymouth, MA – CTA Construction Managers has been awarded a contract for the new $24.1 million 50,000sf Tufts Library in Weymouth. The project is a cooperative venture between the town of Weymouth and the Massachusetts Public Library Construction Program, that awarded Weymouth over $12 million for the construction of a new library.

The project will demolish the existing Tufts Library building, which is over 50 years old, and construct a new and modern 21st-century library on the same site. The planned library will include an expanded children’s services department, community meeting rooms, open reading areas, study rooms, a local history center, and an outdoor amphitheater along with other outdoor open spaces.

The new Tufts Library will also feature innovative technology, including a media lab that will support computer modeling and advanced audio-visual projects and upgraded public computers and wireless internet.

The project is slated to be completed in summer of 2020.