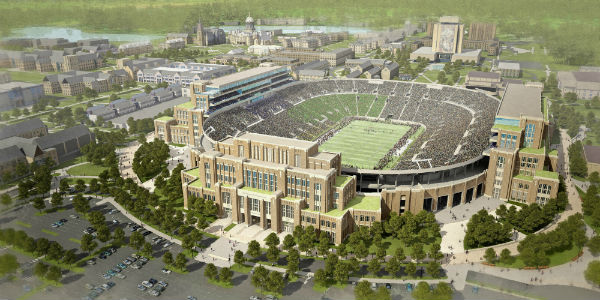 Glastonbury, CT — The University of Notre Dame has announced The S/L/A/M Collaborative, Inc. was selected as lead architect to design the largest building project in the university’s 172-year history. Known as the Campus Crossroads Project, the $400 million, 750,000sf endeavor will attach three new buildings to the west, east and south sides of Notre Dame’s iconic football stadium.

The feasibility study for expanding the use of the stadium was announced this past spring. SLAM and Notre Dame’s goal during the programming and planning stage was to examine if and how the university could make the stadium a year-round hub for academic and student life.

The new facilities will house new research and teaching venues, several academic departments, a much expanded student center, a digital media center and a variety of hospitality and programming spaces. The project is currently in the early design. Construction will begin in about two years and take nearly three years to complete.

“We are honored to have been selected for this historic opportunity,” James M. McManus, FAIA, chairman emeritus of SLAM, and Notre Dame alumnus, said in response to the announcement. “Both SLAM and I have long histories with Notre Dame and I am proud to be able to continue to help implement the university’s educational vision.” In the past 18 years, SLAM has completed more than 10 building projects for the university, among them major projects such as the new Jordan Hall of Science, new Eck Visitor’s Center and the expansion and renovation of the Eck Hall of Law.

“At a time when some are questioning the future of the residential college campus,” Rev. John I. Jenkins, C.S.C, Notre Dame’s president said in a letter to the campus community, “we believe the investment in these new facilities, which will house new research and teaching venues, several academic departments, a much expanded student center, a digital media center and a variety of hospitality and programming spaces, will greatly enhance the campus experience for all those who study, live, work here and visit Notre Dame . . . Since its founding, one of Notre Dame’s greatest assets has been the boldness of its vision . . . this project continues that boldness of vision.”

“It is such an iconic place, so you touch it with great care,” said Steven W. Ansel, AIA, firm chairman and SLAM’s chief design officer, “But what we are doing is exciting in terms of bringing this year-round life to the stadium. This is pushing the envelope much further than we have seen anywhere else in the country.”

The exterior design of the Campus Crossroads Project is inspired by Knute Rockne’s original Notre Dame Stadium – which still stands today as the core of the facility – and is wed with materials, massing and details taken from many of the Collegiate Gothic buildings on the campus.

The three new structures attached to and serving the stadium will house student life services, including space for student organizations; a recreation center and career center; anthropology and psychology departments and a digital media center; and the department of music and the Sacred Music at Notre Dame program. The east and west buildings also will include some 3,000 to 4,000 premium seats for the football stadium with supporting club amenities.

The area between the stadium and the DeBartolo Hall classroom building will become a pedestrian plaza with walkways, trees, planters and seating areas. The entire project will include sustainability practices consistent with other University projects.

Football fans, especially younger ones, have expressed a clear desire to have better access to data and video when attending Notre Dame games. Some of that will be addressed through enhanced broadband connectivity and some by the introduction of video, though the shape that will take has not yet been finalized.

SLAM is the lead architectural firm for the Campus Crossroads Project. Other architects participating include RATIO Architects, Workshop Architects and 360 Architecture. The contractor is Barton Malow Co.

Additional links on the Notre Dame expansion and The S/L/A/M Collaborative below: