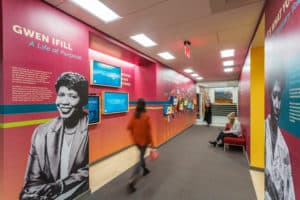 Boston – Ellenzweig has designed renovations to the Simmons University Main Campus Building’s East Wing to house the Gwen Ifill College of Media, Arts, and Humanities. The new college is named for the Peabody Award-winning Simmons graduate who broke gender and color barriers to report for major newspapers and networks as well as moderate vice-presidential and presidential debates, among other achievements.

The challenge for the Boston-based architecture firm was to reposition space in the 1904-1929 building as an interactive high-tech network of teaching and learning facilities and support spaces where students, faculty, and others could experience a panoply of media and communication channels that record and interpret the human experience. The program includes an upgraded auditorium with new digital and audiovisual technology, a computer learning laboratory, computer-equipped classrooms and boardrooms, a graphic design studio, the dean’s suite, and faculty/staff spaces. 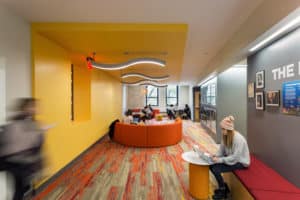 “We wanted to give the department of communications transparent, flexible study areas,” explained Project Designer Bryan Roi. “Within the Department are large areas of permanent and temporary displays, as well as booth-type seating just outside the classrooms.”

The display areas, designed in collaboration with Trivium Interactive, educate the viewer about Ifill’s life and career. “We sought to create spaces that would celebrate not only the new College, but also Gwen Ifill herself as a Simmons alumna and humanitarian,” said Roi. “The space does this by drawing people in through a vibrant, transitional portal at the entry.  This leads into a display zone that informs the visitor about Ifill and her career. Beyond this zone is a large, colorful lounge area where students from all over the college are welcome to sit and hang out.”

Displays in these areas include quotes and messages from Ifill’s writings, her press passes to political events she covered or moderated, a visual timeline of her career in the context of media history, and interactive stations where people can share their reactions. “Gwen QuoteSnaps” on social media are also provided. Along the central spine are digital and pin-up boards for student project displays.

Brian Norman, Dean of Ifill College, stated, “The new wing of Ifill College is a powerful example of using space to not only support student learning but also tell the story of liberal education in the 21st century.  A museum-quality exhibit tells the story of Gwen Ifill as a model of the kind of purposeful life we hope for all of our students: professional excellence, civic engagement, intellectual curiosity, and commitment to the next generation.  As Simmons students and members of the public walk down the hallway, they can imagine possibilities for themselves and the kind of good work they want to do in the world.”